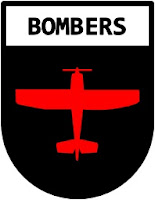 After a sterling start to season 2012, the high flying Bombers (once listed second on the AFL table) are now headed back to earth with a thud.

They had roared out of the hangars with a solid stretch of 8 wins and 1 loss for the first 9 matches of the season. This included fighting wins against Carlton, West Coast, Richmond, and an honourable one point loss to Collingwood.

Admittedly, there were some easier targets in the Bombers sights too, with wins over the Gold Coast, Port Adelaide, Brisbane and the GWS rounding out the early season win list.

Heading into their Round 12 bye, the Bombers spluttered, losing the last two matches. The first against Melbourne, in a wet and slippery battle, and the second a near come-from-behind win against Sydney (the fact they were so far down though... should be cause for alarm).
Of all the teams heading into a bye week, Essendon looked the most desperate for some R&R.

But the bye week only provided short term respite, as the back half of the year has seen Essendon's season shot down, with only 3 wins and 7 losses in the last 10 games (including the pre-bye round 2 losses).

Below are charts of their ladder position, win/loss balance1, for/against balance2 and our ranking points. 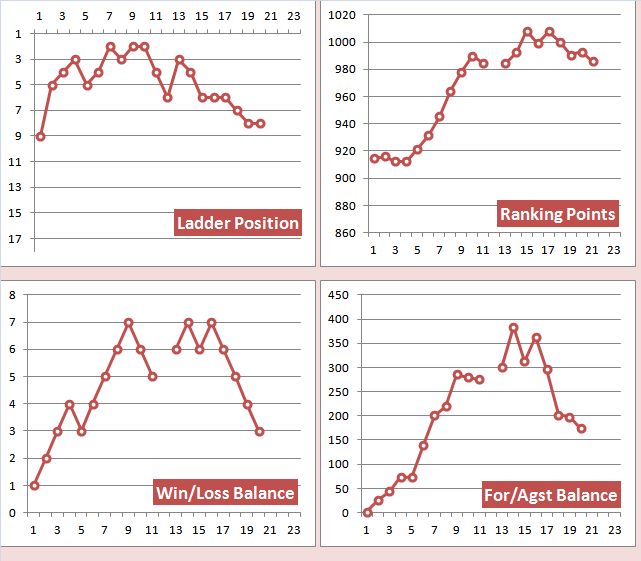 
Transformation:
So, what has happened to Essendon to fall from such a height to be now clinging nervously to the eight?
While some fans revert to Essendon's bad run with injuries, at the end of the day, they still hold as many players on their roster as all the other established teams. Which therefore implies a lack of depth.
That said, James Hird will launch an investigation, or find some other way to scape some goats.

But we wonder if there has been any transformation at Essendon, or if they have been punching above their weight this season. 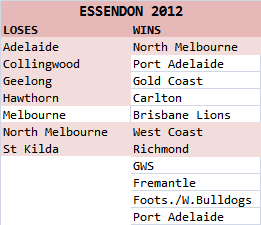 So lets just stack up those wins and losses, and mark out performance against 'quality opposition', taking into account we are using 20-20 hindsight in rating these games.

The highlights games at right are the wins and losses against the top 10 teams in the AFL (as at Round 20). Why top 10? Well they currently have the best chance of playing finals football. So to create a yardstick to determine quality, that is our cut-off point.

From this, the Bombers hold a  record of 3 wins and 6 losses against any likely finals opponents. This is less than exemplary, and could be even skewed further with the last regular season game against Collingwood coming in Round 23.

But, as it stands now, they are 33% against quality opposition, which we think has them in the eight, but treading water... and likely to miss the finals all together.


* This blog post and its sister piece (Notes: Bounding Back) were inspired by the weekends clash between Essendon and North Melbourne, and the marked differences in both teams seasons.
Posted by The FMI at 09:00