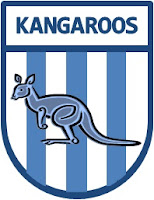 Companion piece 1*:
After an indifferent start to 2012, North Melbourne have charged back into finals contention with a string of victories that has them in the 8 and Finals bound.

They have done the opposite of Essendon, and turned their season around from a negative into a positive one.

Before North Melbourne had the bye in Round 11, they were 4 wins and 6 losses, including a huge defeat at the hands of Hawthorn leading into the bye.

It was after that shellacking in Tasmania that the media went in hard on North, with the club was under-fire from:
- The Herald Sun:  "Brayshaw needs to lead",
- The Age:         "North woes deepen with CEO's resignation", and
- other electronic media as well.

And of course,  Robbo also chipped in TWICE (second effort here: "Breakdown at top has North Melbourne in tatters"), because nothing sells papers like diving into a scandal and going for a basin full.

We should also not forget the grilling James Brayshaw recieved on that weeks' "Footy Show" as well.


Transformation:
Since the bye, they have run at 8 wins and 1 loss, including defeating Adelaide, St Kilda, Richmond, Essendon and Carlton... all vying for final 8 places at the time.

Below are charts of their ladder position, win/loss balance1, for/against balance2 and our ranking points. 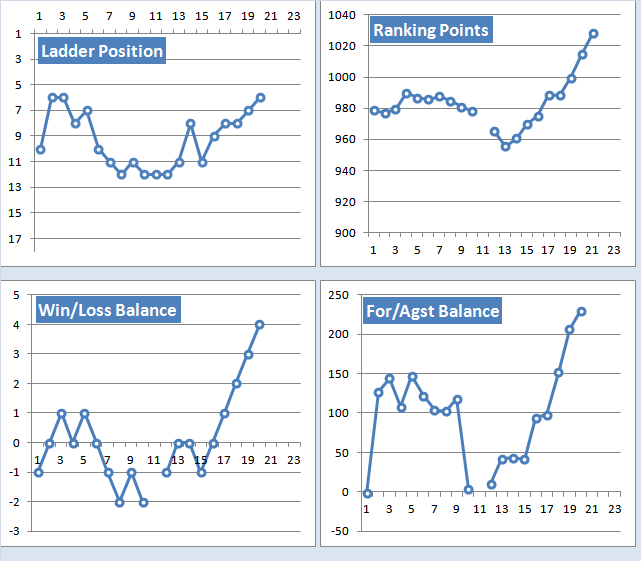 Of interest to us, and perhaps passing interest to power rankings fans, is that the Roos ranking points show an increase of 63pts since the Tassie game (i.e. in 9 games), which is a turn-around of just under 7%... impressive!

Finally, a quick Google search for North Melbourne stories from the past month yields little in media-awarded kudos to the Kangaroos... something that they should not be proud of given the barking by then back in June. Unfortunately, we have come to expect that from the media these days! 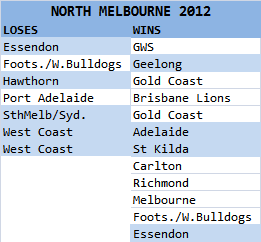 With the benefit of 20-20 hindsight, lets stack up North Melbourne's wins and losses, and mark out performance against 'quality opposition'.

The highlighted games at right are the wins and losses against the top 10 teams in the AFL (as at Round 20). Why top 10? Well they currently have the best chance of playing finals football.
So, to create a yardstick to determine quality, that is our cut-off point.

From this, the North Melbourne currently hold a  record of 4 wins and 5 losses against any likely finals opponents. This is not a positive balance, but it should be remembered that three wins of the four wins have come after te bye, (against Adelaide, St Kilda and Essendon) with only one loss against the Eagles in that same period.

But, for all the North fans out there, the FootyMaths Institute is happy to mark your great run of form, bounding back from your mid season adversity!


* This blog post and its sister piece (Notes: Bombing Out) were inspired by the weekends clash between Essendon and North Melbourne, and the marked differences in both teams seasons.
Posted by The FMI at 09:00