Earlier in the year, we had a quick look at Fremantle under coach Ross Lyon.

On the weekend, your FootyMaths correspondent was preparing a blog post about how stiff Richmond had been this year in losing close matches (as highlighted by Rohan Connolly), when on Sunday morning while listening to SEN, Robert Shaw said, roughly, the below:


Pretty sure @shawry_analyst said on SEN that StKilda are on the record as "known to lose the close ones"... We will check that!
— FootyMaths (@AFLFootyMaths) August 5, 2012

Robert was kind enough to respond as here, which became the start point for this, another blog post about losing close matches and one team under different coaches.


@aflfootymaths yep pretty sure I said that. Saints have lost 5 by under two goals this year that's losing close ones. #dothemaths
— Robert Shaw (@shawry_analyst) August 5, 2012


So, lets look at the data, first a summary of games won and lost under both the coaches: 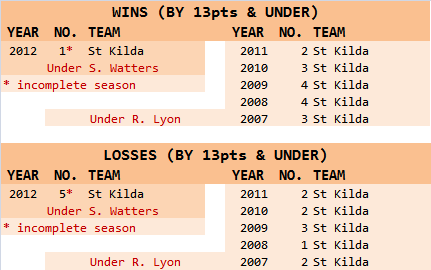 Which confirms what Robert Shaw tweeted.
Now as to the reasons for that... its best we leave analysts and football experts to prognosticate.
(pre-emptive topics: discipline, defensive mind-set, mental toughness ...*insert your theory here*)


PS... for completeness, here are all the games listed, noting that it does include home and away and finals matches, but does not include these drawn matches listed at the bottom.

Also, the 13 point mark was chosen as a cut-off point purely because of the 2012 losses fitting into that bracket. In looking through the data from 2007 to now there were more matches with results just outside that window, but practicality means we need to define a cut-off point, so 13 points & under is it! 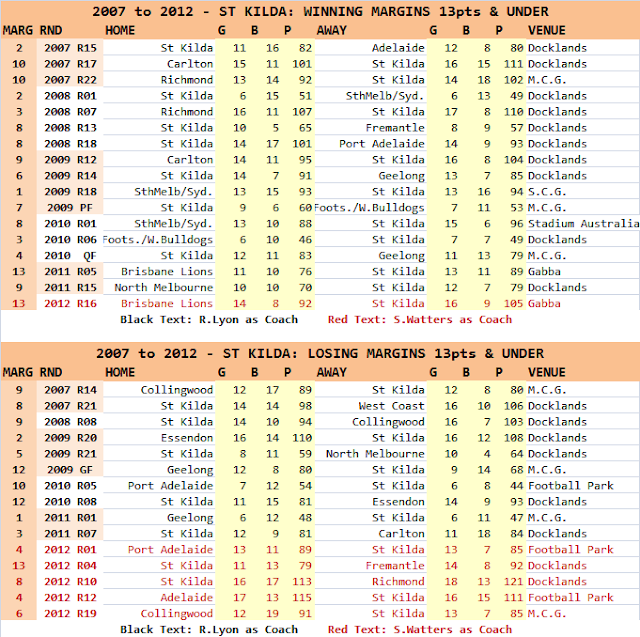 Not included in the above: