Round 19: Only The Strong Survive

In our preview, we called Round 19 the 'Close One', with so many of our tips suggesting close games were the order of the day... or perhaps weekend.


"Four games predicted to have under 2 goal margins, two more for under 3 goal margins and another just over a 3 goal margin.
In fact, using our predicted margins, this week is tipped to be the closest round of the season (average margin of 15.1 points)."

And the results of the weekend bear that to be true, with:
- The GWS Giants getting up to defeat Port Power for their first win at 'home', or at least, one of their homes  (and also as it seems, ending the coaching career of Matthew Primus).

- Geelong holding on against Hawthorn in a see-sawing, fast paced Friday night Friller... sorry Thriller. This also maintains the Geelong hoodoo over the Hawks (at least in home and away matches).

- Collingwood stealing a close win against the Saints (and inspiring a blog post for later in the week), and

- Adelaide and Essendon trading blows in a last quarter lead-changing nail-biter, and a match that continues Essendon's slide in the latter stages of the season (at one stage they were 8-1, but have finished 3-6).

It was indeed a great weekend for close matches.


It was also the weekend that;
- concludes the Blues' push for the finals, with Sydney ending that campaign, and at the same time winning their ninth game in a row. And that 9th victory in sequence is achieved for the first time since 1935 for Sydney / South Melbourne.

- saw Fremantle win the Derby-Darby and continue a final 8 charge, (with Fremantle recording their second highest Derby-Darby win, and set the ledger as Freo 15:21 Eagles)

- had Melbourne chalk up a victory that, if it went as per the @KristianPisano theory, would have made for interesting drafting at the end of the year.


And, of course, after a weekend where we tipped badly, the REAL subtext of all of the above was that the round would be very tough to tip correctly!
...which is our excuse for tipping so poorly! (and apologies to those that rely on the FootyMaths tips for support)!


Nineteenth round results:
Our tipping return this week was a PALTRY 4 from 9, knocking the tipping record back down to 72%, and destroying any gains we made last week.

Only one game in the Blow-out Bin this week, and its NOT the 'regulation Giants loss of the week', this time  its from an unexpected source battling for a top 4 ladder position, on their own dung-heap!
- West Coast got tipped in the bin (for the second time this year) but their arch nemesis Fremantle in a 65 point loss.


We also saw two more games this week where both teams scored 100 points, each of two.

Strongest Gains:
The biggest gain of the week belongs to the purple haze - debunking myths, destroying Derby-Darby opponents and ringing up a +16 ranking points boost. Late season form to the fore in the West... can they make the 8?

Just pipped for this weeks title was the Northerners, who won well enough over the black-hole of a football team that is the Western Bulldogs to gain +15pts.

The other notable achievements of the round were +13pts to BOTH the Sydney teams. And if you must know, it was a 13.13pt gain to the Swans, and a 13.14 gain to the Giants... something to fuel some rivalry, right there!!

Biggest Drop:
The Giants again... no wait, not this week!! ... lets start again!
This weeks biggest loser was the Western Bulldogs, peeling away another 19pts as they continue their slide from 8th ranked and head toward 14th. A season grand total loss of -160pts

Other losses were incurred by; Brisbane at home (-12pts) after losing to Richmond, from the Derby-Darby dust-up/disaster- West Coast lost -11pts, and Carlton lost -10pts and are now a finals non-contender. 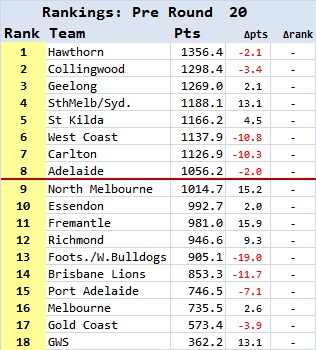 Table Changes:
NO CHANGE anywhere on the table this week. The first time for this since after round 4!

Hawthorn still lead by 40pts over Collingwood, who are another +30pts ahead of Geelong.

North Melbourne's great run of late season form sees them still in 9th, but gaining on Adelaide in 8th, now just 40pts behind.

The Giants collected 13 points but are still adrift of the Suns by 211pts. The Suns are also 162pts off the Demons in 16th.


Finally...
The proposed 'adjusted rankings' tables and commentary is here on the Project: Renewal  page, and will be updated now (or soon will be). Check it!
Posted by The FMI at 15:40