Also known as: ...Its like a Jungle sometimes, make me wonder how the Dons keep on going under! Aha-Ahahaahaa,

And so as 'that season that was' sinks slowly in the west, we think of the Bombers. A while back, their coach defined their season on EMT, so SportsNewsFirst tells us:


“The next three or four weeks will define whether you can win it or not,” Hird told Fox Footy’s (EMT) Eddie McGuire Tonight.
“I’d like to think that over the next three to four weeks you’ll get a real indication of where the Essendon football club is at."

...and now we know exactly where they are at.


This weekend we also bid farewell to the Olympics. Please don't darken our doorstep for another four years, please!

That said, if Juan-Antonio Samaranche-du-Rogge wants to piff about any more gold medals, we will gladly accept one for our tipping prowess. Not just the 8 correct from 9 this weekend, but the for the ACCURACY of our tips!.

Here is the just how close we were;

How close [to. the. edge!] was that!
Three games tipped to within 2 points, part of a total of four games tipped within a goal, another within 2 goals.

And if you would allow us a small indulgence, we also got the Geelong / West Coast tip out by 9 (yeah, we tipped the wrong team, but margin call was out by 9).
...Thats right... even when we are wrong, we are right. The nature of the FootyMaths Supercomputer (like 'Monkey') is irrepressible.

All in all, this makes Round 20 our closest margin call (for a full 9 game round) all year. The chart below shows the tipping index.

Calculated from the sum of the difference between our margin tipped less the actual margin, averaged over the number of games in the round (light blue bars are from the 6-game bye-weeks).


Twentieth round results:
Our tipping returns to strength this week, scoring a big 8 from 9, missing out on Geelong at Subiaco, and the tipping record returns to 73%.

Two games into the Blow-out Bin this week, and again the Giants avoid being dumped. This weeks entries are from the dispirited;
- Power, defeated by 72 points by Hawthorn at 'Fort Aurora', Launceston,
- Bulldogs, mauled by the Tigers to the tune of 70 points.

Strongest Gains:
The Tigers return to pick up this weeks biggest gain, pulling in 15 ranking points in destroying the Bulldogs. Mathematically, they can they make the 8 (as per the Jurica Medal blog), but will they?

The Northerners again just pipped this week for the biggest gain, with a +13pt increase after their gutsy win over the shot Bombers.

No other significant gains.

Biggest Drop:
The Bulldogs go back to back this week as the biggest loser. A huge 22pt loss sees them now firmly in the bottom division of the rankings table.

The only other losses worth noting: Essendon and Carlton both -7pts (actually -6.65 and -6.62 respectively). 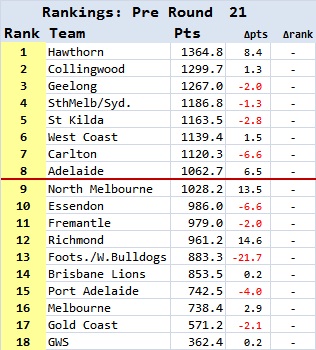 Table Changes:
NO CHANGE anywhere on the table this week. That is two weeks in a row after not happening since  round 4

Hawthorn lead Collingwood by 60pts, who are another +30pts ahead of Geelong.

North Melbourne are still in 9th, but gain on Adelaide  to be now about 30pts behind.

The Bulldogs have slid so far as to be in danger of being overtaken by Brisbane... now just 30pts ahead.

Above titles used with apologies to Grandmaster Flash and the Furious Five.