Also known as: ...Eight places, Eleven challengers, Three must end up in the bin.,

This round closed off one finals question...
- Richmond are now officially finished for September.

...but left many questions unanswered...
- Are the Blues coming again?
- Is this the end of the Bombers tilt?
- Can Scott Watters extract enough out of the Riewoldt-less Saints?
- Can Fremantle hang on and give Ross Lyon the satisfaction of keeping the Saints out?

Our FootyMaths rankings suggest the Dons and done, and that the Saints and Carlton will be stiff to miss (if they do). Fremantle are the luckiest at the moment, and though we rank North outside the top 8, their recent form is fantastic so will be dangerous in the finals mix.

Apologies... circumstances determine that this post is light on analysis today.


Twenty-First round results:
Our tipping returns to strength this week, scoring a reasonable 7 from 9, missing out on Brisbane and North Melbourne, so that we maintain a tipping record of 73%.

Three games into the Blow-out Bin this week, and AGAIN the Giants avoid being dumped. This weeks entries are from;
- Gold Coast, defeated by 64 points by Hawthorn,
- The Bulldogs, picked apart by the Swans at Etihad by 82 points, and
- Essendon, just demoralized by Carlton to the tune of 96 points.

Strongest Gains:
After just missing the the best team ranking last week, North Melbourne score an 18pt bonus after turning over Collingwood. 9 wins from 10 starts has the Roos as the late season form team.

Sydney pick up 15pts after a game that started out badly, but then they sped away for a great away win.

Biggest Drop:
The Bulldogs go back to back to back this week as the biggest loser. Another huge loss, this time by 23pt loss sees them now firmly in the bottom division of the rankings table.

The other big loss this week was the 15pt drop to Essendon, as they now slip well under the 1000pt mark. 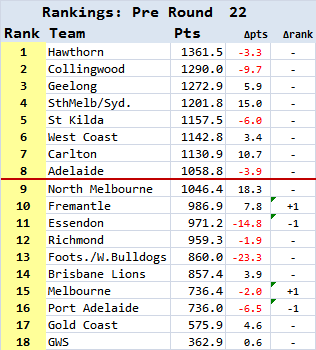 Table Changes:
Interesting table this week, with ladder position changes where;
- Fremantle moving above Essendon into 10th. The Bombers were once knocking on the door to the top 8 in 9th place, but have really slipped recently.
- Melbourne return to 15th (where they were from Round 2 to 17) as Port Adelaide continue to collapse into a screaming heap.

Rankings wise, Sydney in 4th look safely there for a while as they are almost 50pts clear of the Saints.

North Melbourne are really closing in on 8th, and are now just 12pts away. Adelaide may well be in the top 4 of the AFL ladder, but could drop out of our rankings top eight!