Another near end-of-season round, and another week where finals hopes will be dashed.  As we posted this week, the 8th spot of the finals seems to be a genuine filler role this season. If any of Essendon, Carlton, Fremantle or St Kilda get through, their record against the other teams in the 8 is that poor that we expect them to be booted out first week.

So this week it is make-or-break football;
- for Essendon on Friday night when they take on Richmond,
- for Fremantle, who have to travel to Melbourne for a battle with the in-form Kangaroos.

Carlton should be able to get over the Gold Coast at Carrara, and St Kilda should account for the GWS Giants, to keep both their finals hopes alive. A slip up there against teams they really should defeat will surely end their finals run. And a Carlton (or Fremantle) win will make the Saints job even tougher.

So, who will exit the finals race this week?


Here are our Round 22 predictions...

A tight weekend again, with four games tipped for under 1 goal margins, and another 2 for under a 4 goal margin.
This weeks close one is;

The other close ones are Brisbane over Port Adelaide by 3 points, Collingwood to win at Subiaco over the West Coast by 5 points and Hawthorn to win in Sydney by 1 goal.

Just the one game tipped for the Blow-Out Bin this week.
Its the return of the GWS! A three week hiatus broken, as we think St Kilda will win by 90 points.

If the games this week go as we have tipped , then the ladder would look like it does at right. 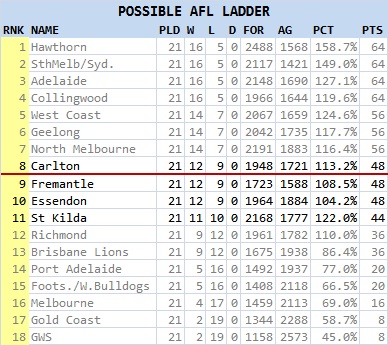 Now that then would create a 'super round 23' with the four teams from 8th to 11th trying to pick up 8th.

That includes St Kilda, who have a superior percentage to the other three teams.
The Saints would therefore need to win against Carlton in a 'mini-final' in round 23, and have Fremantle lose to Melbourne and Essendon lose to Collingwood to sneak into 8th spot.

And if all of that happens, it sets up a huge round 23!


TIPPING CHALLENGE:
Another tipping challenge has been issued, and as it looks another tough week, we hope for a good response... Check back on Tuesday for the update!


MEZZOCULO INDEX - The last Five, and the next Three TWO:
For the last time in season 2012, here is this weeks' Mezzoculo Index. The below index uses the next two rounds only for this week, as there are only 2 rounds remaining..
As the index is designed to look ahead over the coming 3 weeks to determine probabilities of winning, it becomes of less value in the last two rounds of the season.

With another 4 games tipped for margins under 1 goal, we could expect :
- Richmond to win against the Essendon tip, as the Tigers have had a much better run of form over the past 5 weeks.
- Brisbane to win according to the tip against Port, as both teams have similar positions in the yellow zone (with the Lions slightly better).
- A Swans win here against the tip. Our formula determined that Hawthorn win this one, but the data of recent form suggests Sydney are also a real chance... a difficult game to tip.
- Another close game, possibly won by the Eagles against the tip. Collingwood and West Coast both bring similar runs of form to this game, but the normally strong home advantage of the Eagles may see this game go against our tip.
Posted by The FMI at 11:30