Round 22: Last Exit To September


Also known as: ...BUGGER!!! We were planning to use that headline next week!.,

Round 22 is done and dusted, and so too are
- Essendon: Season officially over after a loss to Richmond in a game the Tigers dominated and should have won by 100 points. But the Tigers played poorly enough that the Dons were always just close enough to charge on, if they found the correct gear.

- Carlton: With the finals at their feet, the Blues played like they preferred a September in Bali to one in the finals. It may even be the end for Brett Ratten, but we wont make any judgements on that.
That said, it was a great game by the Suns, who had less of the ball but used it very well.

- St Kilda: The Saints will be ruing a few early season losses as they miss out on the finals after this weekends football. The Saints did what they needed to in defeating the Giants, but the win to Fremantle over North Melbourne was enough to keep the Saints from September, for the first year since a 9th place in 2007.

Of note also was Collingwood losing to West Coast, which could mean that Collingwood could be out in the first week of the finals, or even that the Eagles could face Fremantle in a Derby Final.

And also, Hawthorn now take league leadership, as they do in our rankings (and in Troy's ranks too).


Twenty-Second round results:
Our tipping was poor this week, scoring only 5 from the 9 games. We missed: Richmond, Gold Coast (and who didn't!), West Coast, and Fremantle.
Our tipping record is now 72%.

Two games into the Blow-out Bin this week, and its the return of the Giants to the list;
- GWS who copped another belting, this time by St Kilda by 128 points,
- Melbourne, who couldnt sustain an effort for th whole match and got whacked by Adelaide by 69 points.

Strongest Gains:
Its the return of Fremantle to the best performed of the week, with a agin of 15pts after defeating North Melbourne. Like North, a late season charge has them now in the finals.

Also this week... the Gold Coast score an 11pt boost with that shock win against Carlton that knocked the Blues out of the 8... can we expect better from the Suns in 2013?

Richmond also tipped Essendon out of the 8 with a big Friday night win, and in doing so also collected 14pts this week.

Biggest Drop:
For the first time this year its the Bombers with the biggest drop of thew week, paring a big 16pts from their ranking. This follows on from the last two weeks, where Essendon lost the second most points in each week.

The other two big losses this week belong to Collingwood (down 14pts after a losst to the Eagles), the Giants (down 13pts after another flogging).

Melbourne and North Melbourne both also drop 10pts this week. 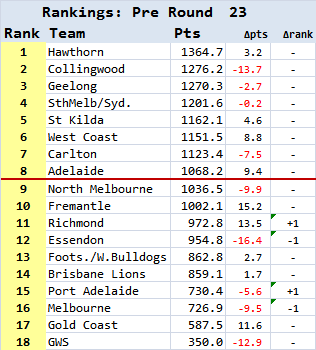 Table Changes:
With the finals teams now sorted out in the real world of the AFL (with Carlton, Essendon and St Kilda now out of the race), a quick look at our ranking table puts the Saints and Blues still in the top 8 teams, and possibly feeling a bit unlucky at missing out.
The Bombers though slipped to 12th. A quite disappointing finish to their season of promise.

In the AFL top 8 are North and Fremantle, who sit 9th and 10th in our rankings. Lucky to be there? Hmm maybe, but a great run of late season form by both of them has had them climbing in our rankings. As we have noted before, we will alter the mathematics of our system to better reward and penalize teams to reflect closer to current performance.

Rankings wise, as mentioned, Essendon drop to 12th with Richmond taking their place. This is the first time the Tigers have headed the Dons since 2007.

Also, Port Adelaide and Melbourne swap places again at the foot of the table.