Crack out the oranges, load up on some Gatorade (or if your a certain age, check the race results while smoking some Craven A's)... it Three Quarter Time in season 2012, and time for the 'Premiership Quarter' Review. Your patented FootyMaths review of how your team is performing this season, according to our ranking data*.

Each week we publish our teams rankings that are accumulated across seasons. We also list the teams net gain or loss of ranking points for the season on the Hall of Fame and Shame page.

As per the Quarter Time Review (posted after round 6), and the Half Time Review (posted after round 13), we will again be using a different metric to the rankings points. As above, the ranking points are across seasons and therefore not solely of this year.
To understand who is playing better this year only, we will be using the a metric that measures how a team played against each opponent on a week to week basis. In this way, we can see if a team performed above or below their ranking level on a game by game basis.
These numbers the get aggregated and averaged to create tables and charts that highlight how your team is performing this year.
Remember of course that these numbers are also linked to the quality of the opposition played to date!


The Premiership Quarter.
Looking at rounds 14 to 18 (5 games each team)** we can generate the table as below to represent the performance in the season's third quarter.

The best performed team by our rankings for this quarter of the season is Hawthorn, who have dominated the competition and are playing like a +1500pt team.
Next comes... daylight!

...Then Sydney, Collingwood and Geelong in the 1300-1200pt bracket, and Adelaide, St Kilda, West Coast and North Melbourne in the 1200-1100pt bracket, to make the best 8 teams of this period.
Hawthorn's 3rd quarter was outstanding, a clear 280pts ahead of the field.

At the foot of the table are the Western Bulldogs and Port Adelaide in the 800-700pt bracket and Melbourne and the Gold Coast in the 700-600pt bracket, but only just squeezing.
The GWS Giants have had a shocking 5 games, playing as a 188pt team... simply terrible. There is no other way to describe their last 5 games.
(GWS Summary: on average -scored 44 points, conceeded 162 points -an average losing margin of 118 points). 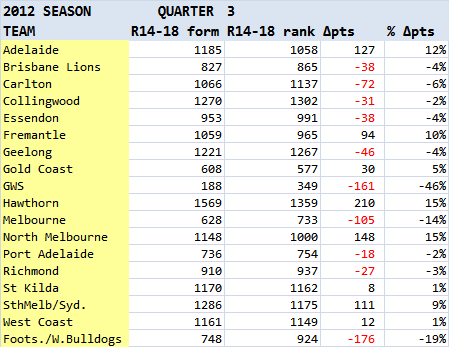 So one again, as we did in the Quarter Time Review and Half Time Review, we chart changes vs the teams ranking after round 18, as per here. The left chart is the raw points difference between how teams have played subtracted from their ranking points, and the right chart expresses that number as a percentage change. 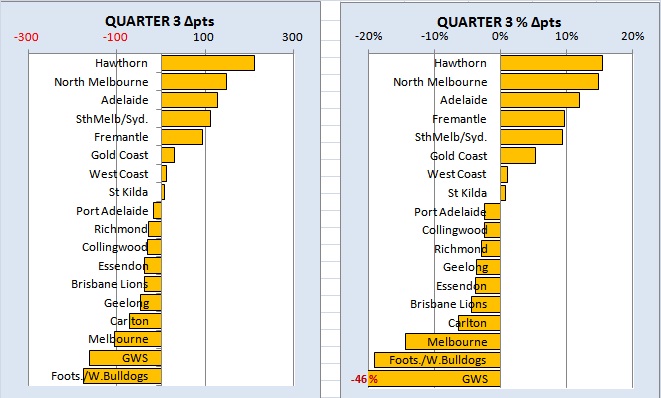 And in this quarter, it is the Giants that stand out (as mentioned earlier) in a negative way, and also the teams from 1925 - Hawthorn, North Melbourne and the Western Bulldogs.

As before, the Giants have had a shocker and are currently ranked just under 350pts, but in that 5 game section, they played as a 188pt team... a 161pt discrepancy from their ranking. But this is worse when looked at as a percentage, which has them playing at -46% under their ranking.
A disappointing result for the GWS, as we had them stabilizing their position in quarter two.

At the foot of the chart is also the Western Bulldogs, who are playing 176pts under their ranking, which is just less than a 20% downturn. Melbourne also struggled, playing 14% below their capability.

In happier times though are Hawthorn and North Melbourne, both playing 15% over their ratings.
Adelaide also continue their good form at % over, and to round out the best five you can add in Fremantle (+10%) and Sydney (+9%).
Also, the Gold Coast may be on the road to recovery as they are playing above their capacity by 5%.

The Winter Months... The Middle Half
Combining the above 5 games (rounds 14-18) with the 6 games of the second quarter (based on rounds 7-13), we can see the table below that describes the best teams of rounds 7-18 (11 games), which makes them the best teams of the winter. 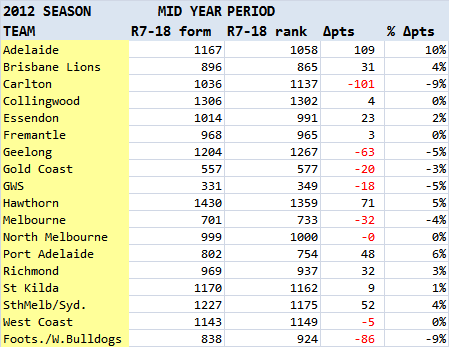 Performing above expectations are Adelaide (10%), Port Adelaide (6%) and Hawthorn (5%) and Sydney and Brisbane (both 4%). 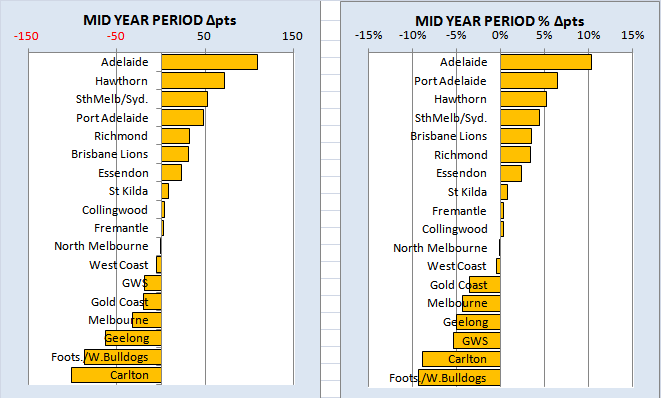