With Or Without New -R20

This is becoming a bit of a habit....

That said, here is both the normal AFL ladder after 20 rounds, and the mythical one where the 'development teams', the GWS and Suns don't exist.

Some cosmetic changes, but the net result is there is still little value in decrying any advantage teams have got by playing the development teams twice.
- Collingwood would get top spot, Sydney and Adelaide dropping down.
- Geelong and North swap places compared to the AFL ladder. Notable though is that under the amended system last week, North were 9th, but now they sit (deservedly) in the top 8 at 7th.

St Kilda also heavily penalized, going from a positive win-loss ratio, to a negative one.


And just for a laugh, while we are creating tables that really do mean nothing at all...
Here is what the current AFL table would look like if all only the 12 VFL teams that were around at the start of the nationalization of the sport were in action. 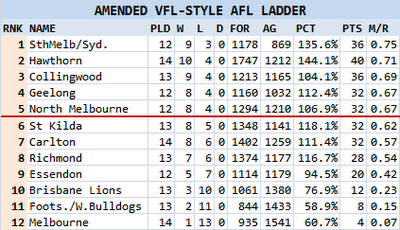 Note that in this instance, we have...
1- removed any games and points gained from matches involving Port Adelaide, Adelaide, West Coast, Fremantle, Gold Coast and the GWS, and
2- considered Brisbane to be nominally "Fitzroy"... which we know is not the case in reality.
3- gained much fun from finding Essendon in 9th.
Posted by The FMI at 15:07