This weekend the AFL season winds up with the 2012 Grand Final*, and we acknowledge the AFL for their truly great decision to welcome Australian music icon Paul Kelly to the M.C.G. to perform.

After last years shenanigans**, Paul Kelly will be a marked improvement, without a doubt. We expect Paul will have to sing this... (and if he doesn't, it is possible the crowd would riot).

We also hold out hope for "Deeper Water" and "How To Make Gravy"...two of his (and Australian music's) all time BEST works.


If Paul Kelly only sings "Leaps and Bounds", then our money for the 2013 Grand Final pre-game entertainment is wagered on this, by Weddings, Parties, Anything (complete with a stick figure-like display on the ground by the 6th graders from South Oakleigh Primary). As jingo-istically Melbourne as you can get (yet still with heart).


Either that, or they could hand the batten to this years ambassador and AFL Finals spruiker par excellence, Tim Rogers.
In fact, why not get Tim Rogers and the backing band from RocKwiz for every Grand Final.
You don't think so?
Try: Exhibit A: a cover of "Tin Soldier" (originally a Small Faces song),
Or: Exhibit B: a cover of "Stop Draggin' My Heart Around" (originally a
Stevie Nicks / Tom Petty duet)

Anyway, enough of the music and pre-game preamble. 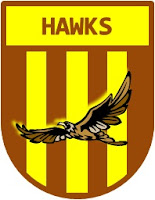 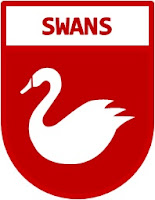 Looking back at the last 5 years of head-to-head matches, it is Sydney who hold a 4-3 record over the Hawks. Splitting this out by venue, it is 2-1 to Hawthorn at the S.C.G., and 1-0 to Sydney at York Park.

More importantly, the record is 2-2 at the M.C.G.. Looking at the average margins at that venue, it is 38pts to Sydney, and 34 to Hawthorn.
All of these points make this game so difficult to tip.

Ranking movements for both teams in 2012.
Both teams had similar seasons, with solid ranking points gains as the year progressed.
Overall, the season gain for the Swans was 134pts, shading the Hawks at 117pts.
So from our indicators, the Swans have improved more than the Hawks, but the Hawks are ranked higher. Interestingly, both charts ramp up at about the same time, post mid-season break. 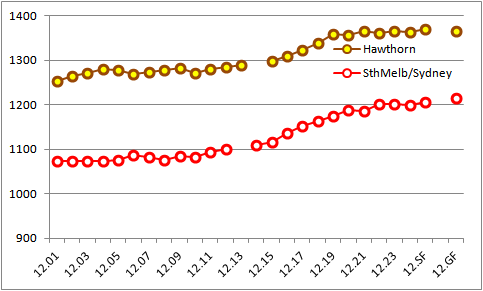 All these indicators suggest a Hawks win, but given the improvement in the Swans, and the record away from home (that is not genuinely recognised), you can mount a case for another Red and White Flag in 2012.


The FootyMaths Grand Final Tip:
All of the above is relevant, but our numbers have been crunched, and the tip is...

For those of you that like the traditional format, here it is.

Good luck to both sides. Take your chances, do your best.


* Barring another draw again, of course.

** Yeah, not putting any YouTube link to last years Meatloaf (alleged) debacle ...apparently he sues (allegedly).
Did I put enough "alledgedly"'s in there?
Posted by The FMI at 09:09