Bird is the Word - Finals Week 3

The 2012 Preliminary Finals have been run and won, and the best four teams of the year played out two magnificent tough finals.

Mr. FootyMaths himself, Tony Tea, applied a variant on the Dave Pope method (see the foot of this blog post, where he tips by thinking of which mascot is more likely to win in a fight) and looked a the biology of the weekends combatants, in what he calls BirdMaths.

From this technique, the two smaller birds were eliminated in this weekends Finals.
Interesting to note that Wikipedia says the Australian Magpie is part of the family 'Cracticidae' not 'Corvidae', but are part of the superfamily 'Corvoidea', so they are linked.
Good research Mr. Tea.
...So if you dislike Collingwood, you now have a reason to share your hate to Adelaide.


Back to the football itself, and it was a pity so many seats remained empty for what were two showcase games of football.

- Friday night in Sydney, there were 57,156 people in attendance, which was down on the capacity of Stadium Australia of 82,500 for Australian Football.
- The Saturday afternoon / twilight / evening match was also down on attendees, with 69,146 fronting against the ground capacity of 100,018.

We wonder if the ticket prices were a significant factor in the venues being only 70% full? Or that the games were broadcast live against the gate?
Then again, it was a home state team versus an interstate team (not verse, morons!), so 70% is possibly very fair.


Numerical Observation 1:
In a twist of fate that could only happen to a club notorious for promising so much to their fans and regularly letting them down, the 2012 Grand Finalists provide Richmond with their annual "What If..." moment.
The Tigers missed their cliched (and its a really overused and underwhelming cliche) ladder finish position of 9th, but instead collected an unusual double.

That is right... Richmond defeated both of the Grand Finalists during the season, yet finished 11th and out of the finals yet again. It wins them no prizes, nor glory. But those two results along with a big increase in our rankings points, should indicate to the Tigers faithful that 2013 should be a season of promise.

It is worth noting that the only other side to defeat both Sydney and Hawthorn was Geelong. But they also lost to Sydney at the S.C.G.
So, while we also made the call below, the term 'Moral Premiers' stays at Punt Road, undefeated vs the Hawks and Swans.

** And while we have your attention on this, there is no case to be made for a 'Team X defeated Richmond so they are 'Moral Premiers' debate. The key factor is in defeating the Grand Finalists. Only Richmond achieved this undefeated. No correspondence will be entered in to.


Numerical Observation 2:
The weekend also hosted the VFL Grand Final between Port Melbourne and Geelong. It was a great contest that was really only broken open around the 10 minute mark, where Geelong powered away from a brave Borough's team to win by 33 points.
Geelong player (and AFL draftee) George Horlin-Smith won the Norm Goss Medal as the days best a-field, and with his award came the completion of an unusual set of numbers.

and we missed one as well...

So, Geelong are the VFL Premiers, winning by a 33 point margin, with the best on ground wearing 33 and their coach and assistant coach all wearing 33 when they played. Unprecedented!
(All we need now is for another former #33 to decide if his big unit of a lad will stay at Collingwood, or leave... over to you David!)

** And if anyone would like to contribute some odd stats from the WAFL Grand Final between Claremont and East Fremantle, drop a line in the comments below!


Finals Week 3 results:
Again,we thought it was an easy week to tip, and was proven correct getting both right. The margins were revered though, which was unexpected.

And, for what it is worth, our assessment of both games summarised into 6 words. 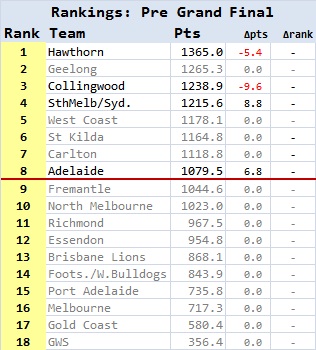 Table Changes:
Down to the last four teams, so the only interest is in the points scored or lost.

Collingwood drop more points after Friday nights loss, and with the Swans gaining point the two teams move closer still.
It still remains highly unlikely for these two teams to swap rankings positions this year though. With a 23pt gap, the Swans would need to win the Grand Final in a canter (can Swans physically 'canter').

Collingwood in 2012 have been de-throned as the best team in the competition, but they remain with a core group of great players. No 'end of an era' stuff. These Magpies will endure.

Adelaide's brave, valiant effort collects them another 7points, and deducts 5points from the top of the table Hawks. A season of good return for the Crows is now complete, and they have much to look forward to next year.


Finally...
The proposed 'adjusted rankings' tables and commentary is here on the Project: Renewal page, and will be updated now (or soon will be). Check it!
Posted by The FMI at 13:37