The AFL has done so much recently to improve its image and build its brand. An entirely non-exhaustive list;
- Respect for Women (though still working on it),
- The anti-homophobia advertisements at this weeks matches,
- Respect for indigenous players and an anti-racism message,
- Taking a WADA approved anti-drug stance (though modified),
- Enacting post match video reviews to clean up thugish elements in the game.

At the venues themselves, they have also worked to reduce trouble, racism, violence etc, with football goers encouraged to report problems. Social responsibility is high in the 'Brand AFL' agenda, and rightly so.

All that is well and good, and an ideal situation for the protection of the AFL brand.

But in the era where most of your brands' consumers follow your product via the Television, where the AFL product is so sought after that makes or breaks TV networks (seemingly part of the decline of Ten), where you sell broadcast rights for record sums...
...well you would really hope to manage your brand, protect it and enhance it as best you could.

Which brings us to Channel 7.


Competition is Constructive.
There was once a time, way back in the VFL and black-and-white TV days when footbal was broadcast by more than 1 free-to-air network. More recently, the AFL was in the enviable position of having 2 free-to-air broadcasters carrying their product.
This meant that, although they were not competing head-to-head on game day, they were viewed by the public, media and themselves as competing.
Competing for on air talent. For technical expertise. For callers who could present the game in the best possible manner. For kudos, reward, sponsors, viewers, ratings and dollars.

In those years, the AFL could gauge public perception of the presentation of its brand through different frames of reference, through different lenses, and from different perspectives.
In reverting to a sole broadcaster in Seven, there is no other freely available reference point or alternate view. There is no other game day viewing option (other than Foxtel, which has limited points of differentiation, and often carries Sevens feed).

Subsequently, we are fed a series of "you just get the feeling..."s, "wowee!"s, and other self indulgent nonsense (Reference the banter on Saturday night about 'who is running in the sprint' et. al.).
The viewing public, on the whole, are interested in the game, its combatants and their teams. The irrelevances and hubris that is being spooned out by the broadcast partner is outrageous, unwanted and unwarranted.

But there is one outlet that provides football coverage of a different kind, with a different view... and treats it viewers with respect. On the past weekend, in Victoria, the VFL Grand Final was televised (as were games on all weekends this season) by the ABC.
Similarly, the SANFL and WAFL also are covered by the ABC too, but we cannot comment on that coverage.

We wont dive too deeply into this, other than encourage you to read this by Damien Berry of the Bound For Glory News site.

"To say that that the ABC’s simple coverage was superior to Seven’s overblown bombastic broadcast would be a massive understatement.

...  Donegan’s professional call of this game was informative and entertaining, noticeably without resorting to childish name calling, useless clichés and pointless catchphrases in order to boost his ego. He and his team just called the game without attempting to overshadow it.Just calling the game is exactly where those at Seven have got it all wrong in 2012."

We wonder if the AFL managers find it galling that a publicly-funded network, that would have not paid a grand sum for the second tier football rights, would be seen to be showing up their premier product.

From a brand perspective, if your customers are comparing you unfavorably with an inferior competitor, you need to re-evaluate your strategy.


Presentation is Paramount.
But maybe the AFL are happy with the product. The premier product that was sold with much fanfare for a record sum, and that is now presented with;

- technical gimickery: The 'Megawall' itself is gimmicky, but just silly when it shows the weather at an indoor game at Docklands. Also, overhead views that provide no context to the play, or boundary line shots that don't present the play at all (more on that later).

- self referential discussion and in-jokes: The banter, particularly of the Saturday night callers, is getting out of hand. No one (well no one over the age of 15) really cares about who of the commentary team is 'running in the grand final sprint'. The broadcast should concentrate in the football. It's not about you, Seven!

- Non football-related filler:  The half time 'week in review' is an interesting diversion, but vision of 'falcons' and bored or distracted crowd shots are just fill. That time should be dedicated to analysis... otherwise, just what were your expert commentators paid for? And lets not even start on "the secret lives of football WAG's". Please!


Again, this is territory covered so well before, way back earlier in the season after round 9, where Rohan Connolly of The Age wrote this;

"...Channel Seven's AFL coverage, which, not to put too fine a point on it, has totally missed the mark this year. Technically infuriating and unbelievably self-indulgent.
Yes, the viewing figures are healthy for Seven, as they should be with no free-to-air competitor for the same audience. And yes, it now throws in some before-and-after-game analysis, correcting a previous sore point. But boy, do the match broadcasts leave a bit to be desired."

Rohan then goes on to talk of Seven's obsession with close-up and replays, and you could also add in quick cuts at key moments.

And that was way back, in Round Nine.


Fast forward to the Semi-Finals, and Seven go for an (alledgedly) innovative shot of Taylor Walkers goal after the half time siren.
The vision selected was from a 'steadicam' on the boundary that lined up behind Walker in  a direct line to goal. 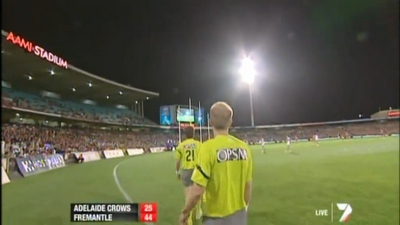 Right there, you could be thinking "That was an ambitious shot,  maybe 50-80m from the goal line"... and 'ambitious' would be used sarcastically in that context.

What we actually saw was the backs of two umpires who walked in front of the cameraman, and a pea-like object fly through the sky... the football (as at right, though note the football itself is not seen in that screen grab!).

Is that 'innovative'? A long distance shot? From the boundary? Behind the player?
Well, one thing we can be sure of... it was a great result for OPSM, too!

As a direct result from that Walker shot on goal debacle, Ben Cuzuppe of the Bound For Glory News site also critiqued the Seven coverage, as per the headline link below.

"Rachel Finch’s shoed-in parts of the pre-game coverage on players’ girlfriends and wives are distasteful and are beyond unnecessary. Not only do the questions subtly suggest that these women are nothing without their famous partners, but penetrates the wall of privacy players have every right to put up. This segment has a more female-oriented audience, which makes it all the worse.It’s hard to figure out which is more offensive in general; that Seven believe that the only way women could be interested in football is by getting a tour of players’ homes by their spouses, or the occurrences of what goes on inside the privacy of a footballer’s home is deemed as worthy content."

It is another good, sometimes caustic, critique of the Seven coverage.

We have selected the above from Ben's article because what Seven are doing can be seen as  devaluing what the AFL are doing with its Respect for Women agenda, as well as maintaining stereotypes and dumbing-down the content.

Again, a Brand Manager should be worried about about how a message is played out in the media, through their actions, or actions of others that undermine the intended message.

And very quickly... back to the Walker goal that wasn't seen.
The big-wigs down at Fort Docklands: The Bronx (sorry, Seven HQ) do really think it was innovative.

"CHANNEL 7 says umpires ruined an "innovative" camera shot of Taylor Walker kicking a vital goal against Fremantle that has been slammed on social media.The goal by Walker, from the boundary line about 50m out, sparked the Crows' comeback. But it was shot from such a long range that it was barely discernible on the screen."

Oh, is that right? The 'umpires ruined an "innovative" camera shot'. By just doing what they are employed for.

Apart for the use of the 'steadicam', can we please ask again... what was "innovative" about that shot? That it was from a long distance away? From the boundary line level? Behind the player kicking?

Yeah, thought so.
Even the use of the steadicam is not that innovative, as that technology is thirty years old.


Perceptions can Prevent Growth
As much as the above covers Seven use of camera angles, self referencing discussion, and off-topic fill, it misses one point that the AFL might be concerned with. 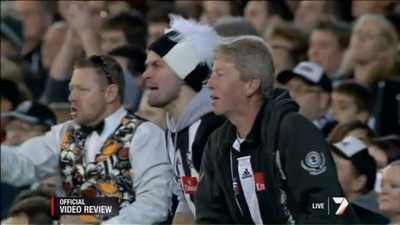 At the top of the post we talked of some of the social programs that have been rolled out to improve 'Brand AFL'.

These are being undermined by Channel 7 with crowd cut-away shots. Two instances over the last two weeks are the inspiration for this post, but in reality, we have seen them all season. 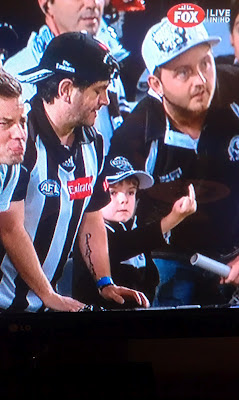 The crowd cut-aways of particular concern are those after umpiring decisions, controversial or otherwise, where the home viewer sees threats, swearing and anti-social behaviour broadcast into their living room. The two at left were after Video Reviews of goals that were reviewed back to behinds.

(And, we should be fair, to a lesser extent the footage of the AFL coaches on game day also provides a few expletives that can be understood by people with limited lip-reading skills.)


Does the AFL realise that by Channel 7 showing those images that it 'damages their brand'?
That Mums and Dads will think twice about taking kids to the football, or even to their local junior footy club?

As a Brand Manager, or even a Development Manager looking to foster the next generation of players, consumers, and audience, such images would again be cause for concern.
The AFL has done much to reduce thugish elements on the field, and to clean up behaviours of its players and fans in the stands.
These images again detract from that good work, and 'Brand AFL'.

Its your product AFL... your broadcast partner is damaging your brand.
It's time to take control!


FOOTNOTE:
We use the images above as examples only, and it is coincidence only that both are from Collingwood supporters. There have been many other occasions of  such crowd behaviour this year... we are not picking on Collingwood.

We also don't deny anyone the right to attend matches. This post is not about 'kicking ferals out of  football grounds'. It is about the image that those shots portray, and the effect on the AFL brand.
Posted by The FMI at 12:29