The first weekend of finals is upon us and brings us four games of quality to start separating the wheat from the chaff.
And first up this week are the Elimination Finals, between;
- Geelong and Fremantle at the M.C.G., and
- West Coast and North Melbourne at Subiaco.

and the Qualifying Finals, between;
- Hawthorn and Collingwood at the M.C.G., and
- Adelaide and Sydney at Football Park.

In this blog post, we concentrate on the Elimination Finalists;

In head to head matches over the last 5 years, we see Geelong having a 6-2 win-loss record.
Since 2008, Geelong have always been favourite to win these matches (by our rankings), and have only beaten the expected margin twice in those 8 games.
They have not played in the finals, nor a the MCG in the last 5 years.

Ranking movements for both teams in 2012.
Geelong have suffered a steady decline this season in rankings points, but they have managed to retain 2nd position after the end of the home and away season. Fremantle have had a steady increase since their round 13 bye. 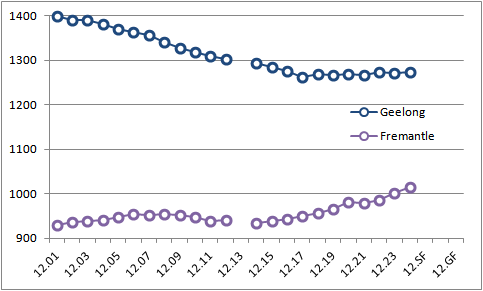 There have only been 7 matches in the past 5 years between the Kangaroos and the Eagles, with West Coast holding a 4-3 lead.
North have won only once in the last 4 encounters at Subiaco, so they have the job ahead of them this weekend.
West Coast have been favoured to win in 6 of the 7 encounters, and on those 6 occasions have beaten the expected margin only twice as well.

Rankings movements for both teams in 2012.
West Coast and North Melbourne have had very similar seasons, with moderate improvements to rankings points as the season unfolded. 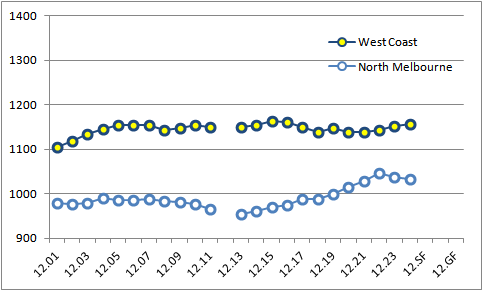 There you have it...
We expect Fremantle and North Melbourne to be Erased from the finals.
...Erase/Replace