The second set of finals games this weekend are the Qualifying Finals, where the winners advance straight through to the Preliminary Finals while the losers can take solace that they get a double chance next week in the Semi Finals..

This fixture is fast becoming a regular AFL 'blockbuster', with 8 clashes between these two teams in the last 5 years, including belter of a match in 2011, the Preliminary Final won by the Magpies by 3 points. The head to head tally since 2008 stands as a 5:3 result to Hawthorn.
In all but three of the 8 matches, the lowest margin was 41 points, which suggests that if one team gets away, the game becomes a procession.
Finally, Hawthorn go into this weeks game having won the last two by 22 and 47 points, and on both occasions kicked 20+ goals.

Ranking movements for both teams in 2012.
By our rankings, Hawthorn have also this season become the premier ranked team of the competition, taking the leadership from Collingwood after Round 14. 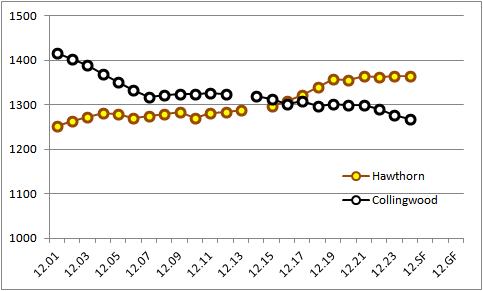 These teams have met only once each year since 2008. Five years and five head to head matches, with Adelaide holding a 4:1 win/loss ratio.
Sydney Swans fans should be emboldened (or embiggened even!) by the fact that the one win was at Football Park, and was by the biggest margin of the five games.
Sydney were favoured to win their last match but were defeated. In the previous 3 games at Football Park, Adelaide have always been tipped to win.

Rankings movements for both teams in 2012.
Both teams have improved at similar rates according to our rankings. Again, Sydney can feel embiggened by the strong form highlighted by the rankings curve increase at the end if the season. There you have it...
We expect Collingwood and Adelaide to Rewind their finals campaign, and play again next week.
...Erase/Rewind
Posted by The FMI at 09:09