The final round of the home and away season has been played and won (or drawn!), so the FootyMaths Institute reconstitutes our Season's Last Quarter Review. The patented FootyMaths review of how your team performed this season, according to our ranking data*.
Please note, this is not a full season review, but some analysis of the last 5 rounds of the year (and also the last 10 rounds) and our benchmarking of how all the teams performed for those rounds only.

Preamble:
Each week we publish our teams rankings that are accumulated across seasons. We also list the teams net gain or loss of ranking points for the season on the Hall of Fame and Shame page.

As per the Quarter Time Review (posted after round 6), and the Half Time Review (posted after round 13), and Three Quarter Time Review (posted after round 18), we again use a different metric to the rankings points. As above, the ranking points are across seasons and therefore not solely of this year.
To understand who has played better this year only, we will be using the a metric that measures how a team played against each opponent on a week to week basis. In this way, we can see if a team performed above or below their ranking level on a game by game basis.
These numbers the get aggregated and averaged to create tables and charts that highlight how your team is performing this year.
Remember of course that these numbers are also linked to the quality of the opposition played!


The Final Quarter.
Looking at rounds 19 to 25 (5 games each team)** we can generate the table as below to represent the performance in the season's third quarter. 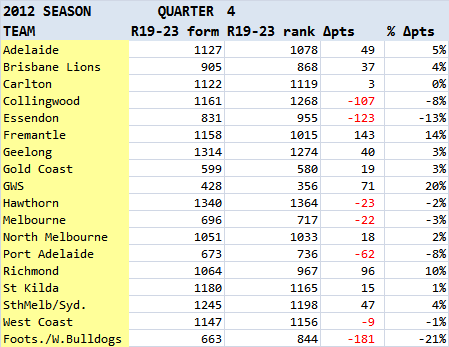 The best performed team by our rankings for the final quarter of the season remains as Hawthorn, who dropped back to playing as a +1300pt team. And joining them in this quarter was Geelong, just 26pts back.

Sydney were a clear third in the 1300-1200pt bracket. Then comes a bunched field of evenly matched teams in the 12000-1100pt bracket: St Kilda, Collingwood, Fremantle, West Coast, Adelaide, and Carlton.

At the foot of the table is Essendon in the 900-800pt bracket, then a big gap back to Melbourne, Port Adelaide and the Western Bulldogs in the 700-600pt bracket. The Gold Coast just miss that bracket at 599pts, and the GWS Giants, after a shocking 3rd quarter have picked them selves up and had a reasonable final term.

So one again, as we did in the Quarter Time Review, Half Time Review and Three Quarter Time Review, we chart changes vs the teams ranking after round 18, as per here. The left chart is the raw points difference between how teams have played subtracted from their ranking points, and the right chart expresses that number as a percentage change. 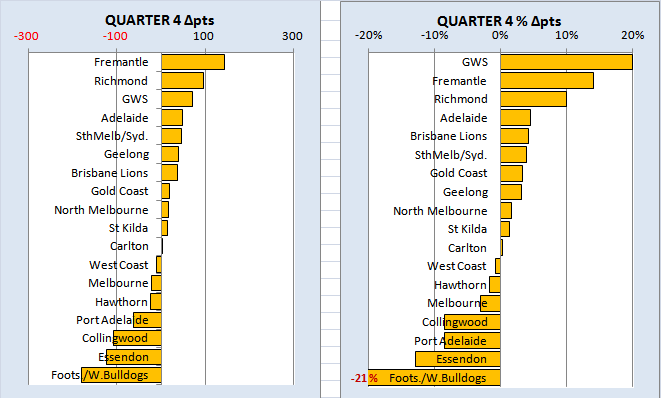 And in this quarter, it is again the Giants that stand out. In Rounds 14-18 they were playing well under their ranking, but in the last 5 rounds, they have turned that around and are playing 20% above their current ranking. Well done!
That said, they do have a low base to work from, so such an big percentage increase is only a small points increase of 71.


The Last Half Of The Season.
Combining the above 5 games (rounds 14-18) with the 5 games drom Rounds 19-23, we can see the table below that describes the best teams of the second half of the season, leading into finals football. 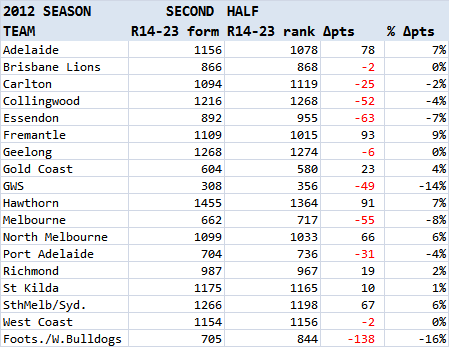 Performing above expectations were Fremantle (9%), Adelaide and Hawthorn (both 7%) and Sydney and North Melbourne (both 6%). 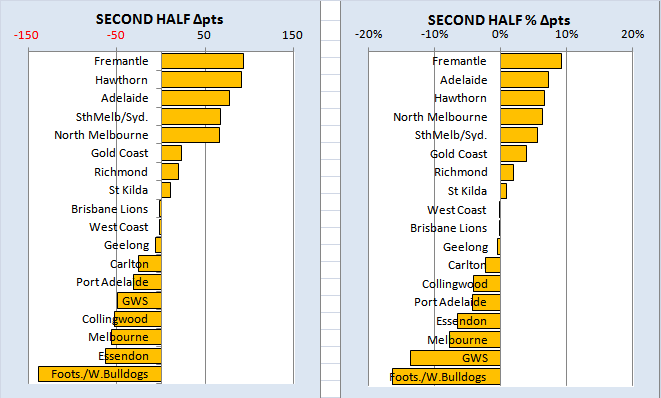 And a final chart here that compared teams first half of the season against their closing second half.
This shows that some teams have has great second halves of the season, such as Hawthorn, Fremantle, North Melbourne and Sydney. At the other end of the table, seasons collapsed inward spectacularly for the Western Bulldogs, Essendon and Port Adelaide. 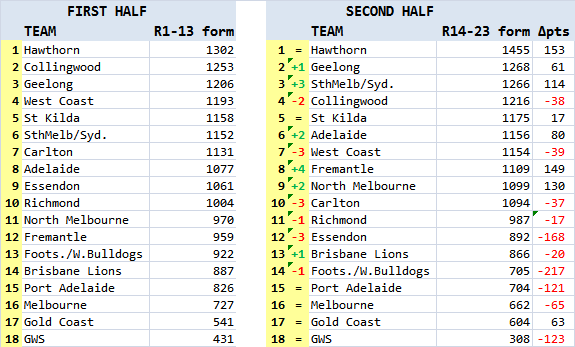 Interesting that this also confirms our previous post during the season, on the return to form of the Kangaroos, as well as the downward spiral of the Bombers.