Week 3 of the finals, and it is now down to just four: the Hawks, the Swans, the Crows and the Magpies.

Officially, it is all about 'the birds'...


Preliminary Final 1: The fresh kill is better than carrion.

Looking back the last 5 years of head-to-head matches, the Hawks hold a 4-3 record over the Crows. Splitting this out by venue, it is 2-1 to Adelaide in Adelaide, 1-1 each in Melbourne and 2-0 to the Hawks in Launceston. Given the final is at the M.C.G. you can all but disregard the other matches which leaves us with a 50/50 result, with an Adelaide win by 27 points in 2009, and a Hawthorn win by 56 points this year. All those numbers make it hard to pick the winner from historical records, but the general trends further below do show a more distinctive quality gap between both teams.

Ranking movements for both teams in 2012.
Both teams had similar seasons, with solid ranking points gains as the year progressed. Though you could argue that the gains were easier for the Crows to accumulate as they started from a lower starting base. With that lower base, the target to reach (margin to win by / lose by) is more achievable, therefore the gains in ranking points are easier.
The Hawks on the other hand, have had tougher goals, and exceeded them on most occasions (18 positive weeks from 24).

Overall, the season gain from the Crows is 123pts, and for the Hawks it is 117pts. That said, the Hawks are well in front and should go into the match as heavy favourites. Further to bolster this is the weeks rest for Hawthorn and the extra game in the Crows legs. 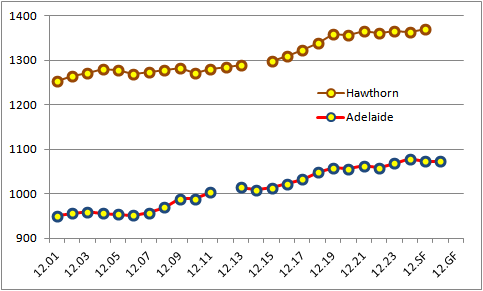 Preliminary Final 2: We have the Wood on you (or Dawes).

There has been much media talk of the Magpies' winning run over the Swans, and that is fair enough. Ten consecutive undefeated matches says the Pies have had the Wood over Sydney. (Depends though, will they play Wood or Dawes).
That said, it is not as cut and dried as that simple number. Looking at the last 5 years between these two teams we can see that the average winning margin by Collingwood in games in Melbourne was 43pts, but in Sydney was only 18 points. Extracting out the last two years, the Magpies winning margin moves to 7 points.

Rankings movements for both teams in 2012.

The rankings points charted shows how these two teams are now very evenly matched. The Magpies have suffered a 160pt drop in ranking over the year, representing 16 under-performing weeks (based on our ranking) from the 24 matches to date.
Counter to that is the improvement in the Swans, particularly later in the season. A total 134 ranking point increase over the season represents 16 weeks of positive performance from 24 weeks, and includes a run of 120pts accumulated in 11 of 12 weeks from round 10.

This improvement, recent run of form, home ground advantage, the week break for Sydney, the two tough weeks of finals football for the Magpies, and the closeness of the last two games suggests the Swans should nudge into match day favouritism. 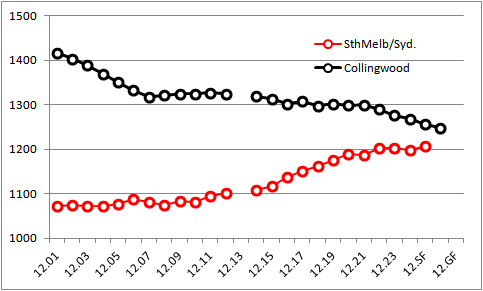 A close one in Sydney, and a relatively easy win to Hawthorn.

For the Crows to win... they need to get a bit menacing, a touch evil and become very intimidating.
Just ask Tippi Hedren.