Interesting weekend of football...
- Hawks played harder and tougher than the Magpies. Pies fans will be thanking their lucky stars that they have a double chance. For the Hawks, with such an injury list from Friday nights game, the week of will be very welcome.

- There were many in the media thinking the home final would be enough to get the Crows a week off. But another dogged effort by the hard-as-nails Swans put paid to that theory. Its a home Preliminary for Sydney (if Stadium Australia can feel like home). The Crows play again, and once again front at Footy Park.
Noteworthy from  this game: It was Adelaide's lowest score at Football Park since they entered the competition.

- Geelong walked away from this finals series early, having not done so at such an early stage since 2006. Will some of their greats that played in a triple premiership golden age also walk away?
Fremantle though, were irrepressible! While not 'born from an egg on a mountain top', Matthew Pavlich is indeed some form of footballing god that continues to inspire the Dockers.

- North Melbourne bow out of this finals series seemingly just happy to have defeated Collingwood in Round 21. That game pretty much ensured they were a 2012 finalist, and since then the Roos have lost to Fremantle (in Melbourne) and battled against the GWS Giants. Were they mentally defeated before taking on West Coast?
The Eagles at home are an awesome combination. Next week, can they repeat such form at the MCG?


Finals Week 1 results:
Our tipping came home well with 3 from 4, but we must admit to being out by a long way on most margins... more work needed!

The West Coast -v- North Melbourne game was well within the scope to be added to the Blow-out Bin this week, but as these are finals matches where a different dynamic is used, it wont be added. 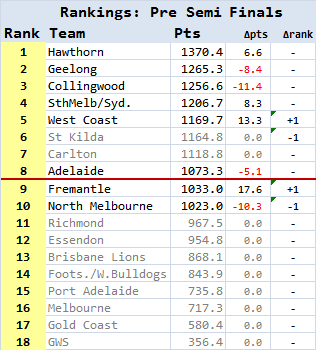 Table Changes:
Eight teams played this weekend (non-playing teams are grey at right), and those Finals Matches saw Hawthorn increase their lead at the top as the nations' best football team.

The Hawks are now ~110pts clear. To put that in perspective, the Hawks are clear of Geelong by the margin between the Cats (2nd) and St Kilda in 6th.
At the start of the season, they were third, trailing the Magpies by 160pts, so it has been...


1) quite a season from the Hawks to fly to the top, gaining 117pts, and
2) a disappointing season for the Magpies, slipping from top spot to 3rd and losing 161pts as well.

West Coast's big win at home boosts them into 5th (displacing St Kilda), and Fremantle's domination of Geelong also allowed them to sail into 9th, as the Kangaroos were bounced out of 2012 by the Eagles.


Finally...
The proposed 'adjusted rankings' tables and commentary is here on the Project: Renewal  page, and will be updated now (or soon will be). Check it!
Posted by The FMI at 11:31