Yes that's right, while others shut down their rankings as the hone and away season finishes, we power-on through the finals as we rank teams for ALL matches that determine the AFL premiership.
So we continue later this week with the finals tips for Adelaide, Collingwood, Fremantle, Geelong, Hawthorn, North Melbourne, Sydney and the West Coast.


Below is the table for were they all finished after the full year, with a real surprise appearance in 2nd position!

Later, we also hope to review all the teams this season... its our plan, and may take a while! Hopefully, loyal reader, you will indulge us plenty of time for this. We will need a break from blogging these rankings to meet the week-on-week AFL schedule (and still do our day jobs!).


Tipping Results:  Man v Machine Tipping Challenge results out tomorrow, and this weeks data is unprecedented in its non-complexity!


Twenty-Third round results:
Our tipping was poor this week, scoring only 8 from the 9 games.
...or 9 from 9 if you count the draw as a win (which we don't but others do).

PS... taking advice on the general consensus on counting the draw as a 'correct tip' or not... comment on the blog below, or tweet to @tkyc.

Three games into the Blow-out Bin this week, and the Giants don't figure on the list(!), but the Suns do;
- Adelaide tipped the Suns into the bin, whacking them by 91 points.
- Brisbane put an end to a miserable Bulldogs season, cleaning them up by 67 points, and
- Melbourne's black year ended with a 61 point defeat to the Dockers.

Strongest Gains:
Fremantle finish the home and away season with back-to-back big gains in our rankings, picking up 13pts this week after 15pts last week. A late season burst that will boost their finals confidence.

Adelaide also scored a 10pt game after beating up on the Suns in a "we are in the finals" celebratory home game demolition derby.

Brisbane's 9pt gain over the hapless Bulldogs the only other significant change.

Biggest Drop:
The Western Bulldogs return to the list with another big drop this week. The -19pt drop sees then lose a cumulative 221 ranking points for the season.

The only other big loss this week belongs to Melbourne, down 10pts this week, to close out their season on  a sour note. 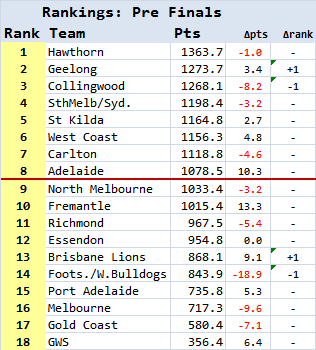 Table Changes:
To round out the home and away season, we rank Hawthorn as the best team playing, with (surprise!) Geelong sneaking back into second!

The Cats hold a 5.6pt break over Collingwood, and capture 2nd after the defeated Sydney by more than expected. Collingwood drop points as they did not defeat Essendon by the target margin (just!).

Brisbane also pick up a place, moving to 13th as the Bulldogs continue to drop off.

At the foot of the table, the GWS are 224pts below the Suns, who are in turn 137pts away from the 16th placed Demons. These are the two largest gaps in the rankings.


Finally...
The proposed 'adjusted rankings' tables and commentary is here on the Project: Renewal  page, and will be updated now (or soon will be). Check it!
Posted by The FMI at 11:12