Week 2 of the finals has make or break matches for those teams on their second chance... will a great season and top 4 finish be undone this weekend for Adelaide and Collingwood? Can the two non-top 4 finishing teams achieve a Preliminary Finals berth next week?

Its an all Subiaco weekend of football, but not in WA as both finals have the West's best in action out of state. It is also make or break time for WA football's dream of a Derby-Darby Grand Final. If one team is eliminated, its all over for another season.

In the past 5 years, its the Magpies who hold the upper hand in head-to-head matches, with a dominating 6-1 record against the Eagles. This includes a 100 point win by the Magpies back in 2008.
In more positive news for the Eagles, their win was this season and by a healthy 49 point margin at Subiaco. They have also played well at the MCG this year only losing by 3 points.
Some other points to note:
- The margins that the Eagles have lost by when playing in Melbourne is trending down (progression as follows... 100 points, 83 points, 52 points, 20 points, 3 points...)
- Of the 7 encounters between these tow teams in the past 5 years, FIVE have been played in Melbourne... who says the Magpies don't travel! (In both Subiaco matches, the result is 1 win each, and note worthy that the Collingwood victory in the West was by 22 points is book-ended by wins in Melbourne by 100 and 83 points. Pretty clear why Collingwood don't like to fly to Subi!).

Ranking movements for both teams in 2012.
Collingwood, after a hefty fall at the start of the season balanced out their ranking through the mid section of the year before a gradual decline at the end of the season. Coming off such a high starting point, this decline is not unexpected.
West Coast had a season that mirrored that of the Magpies... a bright start, a staid mid-season and an upturn at the end. Over the length of the year, these two teams have closed in on each other, from a gap of 312pts to the current gap of 87pts. 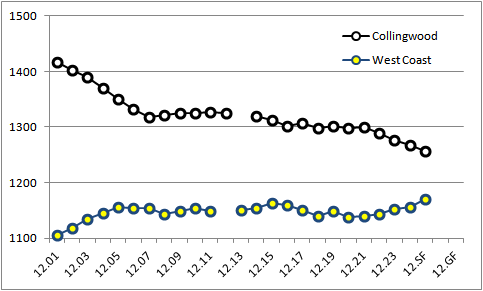 It is another lopsided head-to-head record of matches between these two sides over the last 5 years, with the Crows holding the upper hand and leading 6-2 in the eight encounters. This includes a 2009 trouncing by 117 points at Footy Park.
While the Crows have the wood on the Dockers generally, the last two times these teams met at West Lakes, the score is 1 each, with both games won by just over 4 goals. Some small hope for Dockers fans, in a track record that is not so flattering.

Rankings movements for both teams in 2012.

Both these teams have increased in ranking points as the season has unfolded, and both have climbed our rankings ladder as a result. An almost carbon copy season for these two teams.
Adelaide have gone from 10th on our ranking table with 950pts up to 8th at 1073pts (an increase of 123pts). Fremantle started at 11th on 928pts, and moved up to 9th with 1032pts (an increase of 104pts). 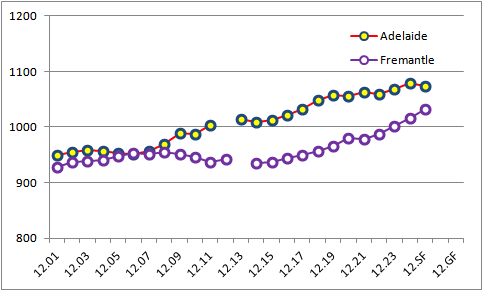 There you have it...
Home wins by around the 2-3 goal margin range.
That said, for the dream of the WA Derby-Darby Grand Final, its GO THE AWAY TEAMS!
Posted by The FMI at 09:35