Also known as: So, Two Weeks Of Footy Gets Us Right Back Where We Started...

So as we conclude the Semi-Finals and week two of the series, we arrive back at the same teams that topped the ladder 1 though 4 at the end of the home and away season.
That had many wondering of the point of the expanded 8 team finals series, when the overwhelming weight of numbers suggests there is little hope for teams outside the top 4 to win it.

There is of course, one reason to run the finals with eight teams...


The two teams that dropped out did go down with all guns blazing though.
Both Fremantle and West Coast started like wildfire and jumped their hosts, and both were slowly reeled back in. Both games remained close and hard-fought all the way through.

In the end though, the home grounds, crowds, and strength of the opposition was too much. So we bid the West Australians farewell for 2012, and look forward to them progressing in 2013.


For the Record:
We are very sure the correct call was made on the 'point that should be a goal' for the Magpies in the first quarter. 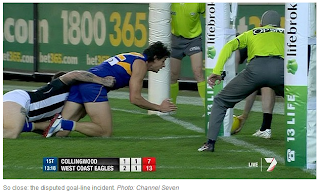 This side view at right is inconclusive, but there are assumptions that can be made from that image:
- the point of the ball clearly seen, so the ball is sitting parallel to the line, and at its narrowest width.
- so much of the ball visible behind the post (from a camera on an angle).

Given the above, it is reasonable to expect that the ball was over the line.


The top down view though, is the smoking gun that we believe the AFL officials used to justify the desicion. 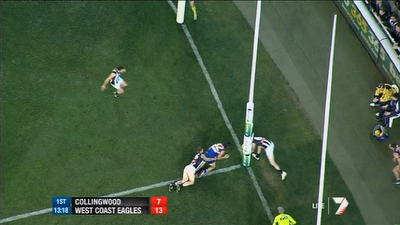 There is a narrow, but clear, line of green between the white goal line and the yellow of the ball. The decision of the score review system was correct, based on that split second of video vision.

What was incorrect, was that the umpires at the time, the goal and boundary umpires on the scene, did not call for the review themselves after play had stopped after the score was registered. Direction to the field from the score review panel should not be allowed unless requested by the officiating staff on field.
(All images clickable to expand)

'Pandora's can of worms' gets opened up if you start allowing anyone other than the 10 umpires on the field* to have any say in proceedings.
It's the thin edge of the wedge!


Finals Week 2 results:
Well, there is not much to say about this weeks tipping, other than we thought it was an easy week to tip.

We were more impressed with our margins we tipped, which, as Damien Berry said was...


And lets not forget (without naming anyone in particular) that there was a fair amount of press suggesting the Eagles would come away with a win on Saturday. 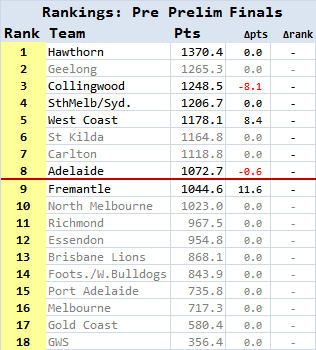 Table Changes:
With six teams left and only four playing, there was not much movement, but for completeness, here are the standings.

Collingwood drop closer to the Swans in 4th, and next weeks match could see these two swap places (though unlikely as it would take a mighty big win to the Swans to achieve this).

...Unless Adelaide cop such a smashing from Hawthorn that they lose ~30 rankings points, which hasn't happened all season!

Similarly, West Coast collected 8pts, and will finish 5th, unless Sydney get crushed and lose ~30 rankings points. Not going to happen.


Finally...
The proposed 'adjusted rankings' tables and commentary is here on the Project: Renewal page, and will be updated now (or soon will be). Check it!


...and for no other reason than we found this over the weekend, here is a bit of the true Hulkamania-era madness.
That, and 'Gene Mene' is the consummate professional!