Also known as... It is high time we finalised the season rankings.

So, with the Grand Final run and won, the last adjustments of the 2012 season can be lodged.


Grand Final results:
Missed it, by that much!

That is, we didn't tip the winner at all. 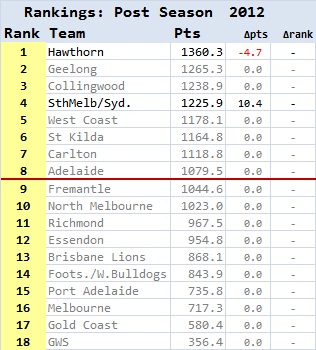 So for what it is worth, here is the final table of results, with the changes to the two competing teams.

No positional change to either team, and Sydney move to be a clear 13points behind Collingwood in third and 40points from Geelong in second.


The season belongs to Sydney, while the best ranked team Hawthorn must wonder what slipped through their fingers.


To come, we will review the season in another series of posts, but for now, here is the original (and best) lyrics to one of the better AFL club songs.

Cheer, cheer the red and the white,
Honour the name by day and by night,
Lift that noble banner high,
Shake down the thunder from the sky
Whether the odds be great or small,
South will go in and win overall.
While her loyal sons are marching
Onwards to victory.

Congratualtions, Sydney!
Posted by The FMI at 15:16