In the first of our review of the season blog posts, we start at the foot of the 2012 AFL table, and look at the bottom five teams.

We have already documented something on these teams since the end of the home and away season (see this post: Five Adrift), and you would hope that there are bells ringing down at AFL HQ about the state of the competition... along with the other alarms they have now: Integrity. Cap Infringements. Tanking. 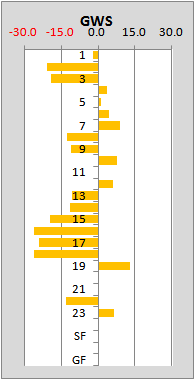 18th:     GREATER WESTERN SYDNEY
Ranking: 18th -      356 points  -144
The 2012 season was always going to be a tough one for the newest 'franchise' in the AFL. Such a young set of lads. The inexperience and developing bodies against seasoned players that faced the GWS was always a difficult river to ford. This would have been known to the club and AFL, and certainly should have been known after the introduction of the Gold Coast the year before.

It was from the Suns introduction that we decided to set the Giants initial ranking to 500, purely to make our tips meaningful. As it turned out, the 500 rank was still an over estimation, and the team truly struggled, racking up 5 occasions when they were the worst performed team of the week, and 14 occasions where they were belted by 10 goals or more.

We also noted that in the third quarter of the season (rounds 14 to 18), they were appalling  playing at a rating of only 188pts (i.e. about half their ranking at the time and one ninth as good as the best team).
This can be clearly seen in the chart, where there is so much orange ink to the left of the chart.

Where to from here?
Firstly, as far as our rankings are concerned, we will re-set their ranking back to 1000 (from the start of 2012). This will will reset their ranking from the approx. 360 rank now to an approx. 480 ranking. We do this as all team start as 1000pts, and we adjusted to 500 purely for 1 year to improve the accuracy of our tips.

As for the club itself, it can only improve... so MUST improve. If it doesn't inside the next 5 years, you may see the Canberra or Tassie Giants. There is enough kids of talent to see them improve, but not by enough for 2013... or even 2014. 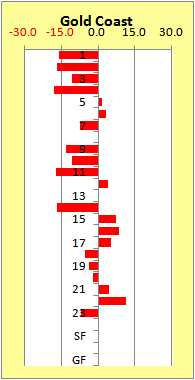 17th:           GOLD COAST
Ranking: 17th -      580 points  -98
It would be fair to say that we at the FootyMaths Institute, along with a fair selection of the football world, were expecting a better season from the Suns this year. If you look at the league ladder, they the raw stats say they went no where. Three wins in both seasons, and also a cumulative score of +1500pts, though less in 2012 than 2011. They also had 9 losses by 60points or more, which cant be good for the confidence of the players.

Looking at our data, the Suns lost 98 ranking points, and the chart at right clearly shows there were some games (particularly early in the season) where they performed well below expectation. The Suns also were the team to drop the most rankings points in a week on three occasions.
We should also note there were some calls on twitter and in the media for McKenna's sacking through this year as well.

To their credit, the Suns did have a better post-bye half of the season, but overall it was a poor return for a team where much more was expected.

Where to from here?
Stability brings strength, and by not sacking McKenna the Suns hierarchy have done the right thing. The playing stocks on the other hand are a different matter. Such turnover of players in the off-season, with quite a few players 'wanting to return home', does not bode well. You would hope the culture at the club would be strong enough to hold players to the club, rather than have them running home to somewhere more comfortable.
Undoubted talent still exists, but can the club actually get that talent to click... this is the challenge for 2013. 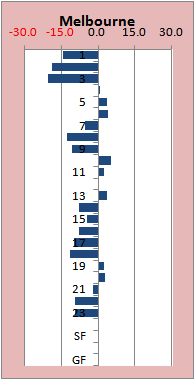 16th:           MELBOURNE
Ranking: 16th -1      717 points  -120
As we write, the Melbourne Demons season begins as it started, in the headlines for all the wrong reasons. Now, its allegations of tanking, and back before the first bounce it was for a hatchet attack by a player, and the sad passing of Jim Stynes. What a bad year for the Mons.

And on-field too, finshing 16th and losing 717 ranking points. Another team, like the GWS, to have had a terrible 3rd quarter to the year, with 5 weeks in a row of performing below expectations.
But the season was perhaps defined by the early games, and the first four games in particular. A 1st round loss to Brisbane when the world was behind them after the sad news of Jimmy's passing, then a belting by the Eagles in round 2. You could mount a case that the Brisbane game should have been banked as a win, but missed.
Another loss to Richmond in round 3 and the loss to the Bulldogs in round 4 that was the Jim Stynes tribute match. Both matches probably should have been won, but things like those chances missed defined the season. The season also contained 6 losses by more than 10 goals.

The biggest positive on the chart at right was from the round 10 win against Essendon, by a mere 4 points. Their biggest win was over GWS, but, the impact from this was less that a 10pt ranking increase.

Where to from here?
With the Tankquiry on-going... who knows, other than to suggest 2 to 4 seasons of more trouble and struggle.
Mark Neeld needs to set the tone to the team, and a broom needs to go through management. Standards need setting and adhering to. Without them, Melbourne could be without a namesake team. 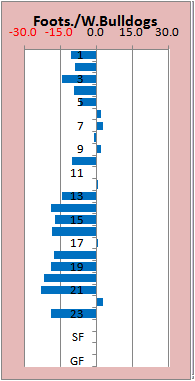 There is no doubt the Bulldogs had a shocker of a year. With Brendan McCartney taking over, the season was always going to be difficult, and coming after a few seasons where they really had a good stab at a flag (three preliminary finals in recent years), we can see the list is unbalanced now. Older players, and a lot of youth in 2012 filling in for some older experienced heads that retired, with a hollow middle.
We expected a better year from the Bulldogs (though we certainly had them missing the top 8), but reality bites hard when opportunities are lost.

For the past season, they were our biggest loser, both in ranking points lost, and ranking table drop. The chart at right shows the positive performances were few and far between. Add to that, they suffered 8 losses by +10 goals (3rd worst overall) and also were our weekly worst ranked team for 6 weeks (worst for the year).

Where to from here?
Other than another season or two of pain, there is not much else on the horizon. With new off-field leadership announced, it is now down to McCartney to re-invent them on the park.

They will be an interesting case study in re-building a team. 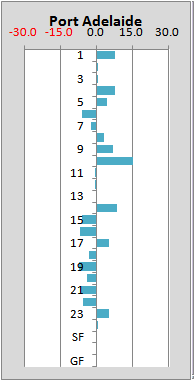 14th:         PORT ADELAIDE
Ranking: 15th +1      735 points  +16
Port Adelaide managed just 5 wins and a draw for the year, which was an improvement on 2011, and of the bottom 5 teams they were to only team to improve either in ranking table position or in ranking points. Overall, this was better than we expected, but finishing 14th and 5 games adrift of 13th is still a poor return.

The season started well with an unexpected defeat of St Kilda, and as the chart at right shows, a string of good performances through to round 10 (though there were no wins other than Rounds 1, 8, 9 and 10).

But in the end, the season fell apart, with 1 win from the last 12, including the loss to the GWS, which saw the end of Matthew Primus. The string of 7 of 8 games under target includes the Round 19 loss to the GWS. The only game to break what could have been an 8 game streak was a win against Melbourne in Darwin.
Interestingly, Port were only badly beaten once (a 72 point defeat by Hawthorn in round 20), which also sets them apart from the others in the bottom five.

And to end off a season of slight improvement, with the head coach gone, the club, and football, lost John MacCarthy. A year of regret for the Power.

Where to from here?
With a new coach installed after a painstaking end of season search, they are also on another re-build phase.
If the off field arrangements can also get into positive territory (i.e. stop making financial losses), then they can begin to shine again, even if it is as South Australia's smaller-brother team.

NEXT, the other 5 teams that missed the finals.
Posted by The FMI at 09:18