The third, and penultimate in our series of Season 2012 team reviews.

This time, its the teams who made the finals and dared to dream that history wont repeat and a winner from outside the top 4 would claim the flag. And it is worth noting that 2 of the bottom four powered into the finals on the back of some great late season form. 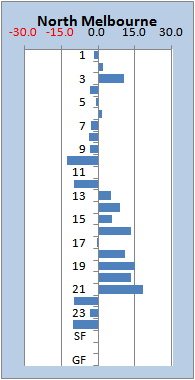 There is no doubt that the Kangaroos are a team working on the proverbial shoestring budget, and coach (Mr. Scott version I) and the players work harder than most to overcome that, as well as the on-field pressures. The "Shinboner Spirit" was often called upon, but Scott v.I seems less interested in that rallying cry. A more down-to-earth and honest approach from him has seen the 'Roos make this years finals (token perhaps, but nonetheless, finals experience).
And as always, trouble at Arden St is never too far away, and this time it struck mid-season. Their pre-bye haul was 4 wins and 6 losses, but key amongst them was a loss to Hawthorn, sorry, a huge dispiriting loss. This had the press calling for heads to roll, as we mentioned back in August.
Not to be deterred, North re-grouped and charged back into the top 8, running the second half of the season into a 10 win - 2 loss return, including wins against Adelaide and Collingwood.
Finals credentials earnt.

Against North Melbourne this season was the sense that knowing the top 8 position was secure, they backed off in the last two rounds, dropping their intensity.
They certainly should have done better against both Freo and GWS in the last two weeks and then got destroyed in the first final away at Subiaco.

Where to from here?
North put in a great 2012, and better than most would have thought (though we did put then in our 8 at season start). Can they replicate that in 2013 and push harder for a flag?
Scott v.I will need to work hard at keeping the focus and intensity, and ensuring lessons from this year are well understood. 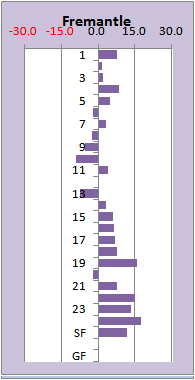 Wonderful Fremantle, always entertaining without posing to much of a finals threat.
Well, that has been the Fremantle of old, but is this the year they turned the corner? The new coaching appointment at the end of 2011 certainly shocked the football world, generating everyone to think differently about the "Purple Haze".

When using our rankings data, the Fremantle rollercoaster took an interesting ride. They started the year ranked 11th, dropped to 13th after round 13, before then charging back up the table to 9th.
Was it because of the team adjusting to the new Lyon style, or did they just gel and mesh more as a team as the season rolled on?
The Dockers also came home with such a wet sail that they claimed 3 'best of the week' awards, all in the last 5 weeks of the season. They also dished out three +60 point beltings (including 1 against the v West Coast Eagles) while not copping one themselves.

The bye seems to have been a bit of a tipping point for the Dockers as they returned an 8 win - 3 loss second half of the year, after starting at 6 wins - 5 losses. And we must say we cant determine any moment or indicator that provides any reason as to this stepping up of performance... your thoughts and contributions welcome!

Where to from here?
Fremantle's rise is exactly what the board would have wanted when they poached Ross Lyon from St Kilda, and dumped Mark Harvey. Ruthless it may have been, but the desired effect on the competition was achieved. If the Dockers players also maintain that trademark Lyon steely resolve, they should be in a position to challenge for the flag in 2013.
Anything less and the football world will once again declare them as the ever-vague "Purple Haze". 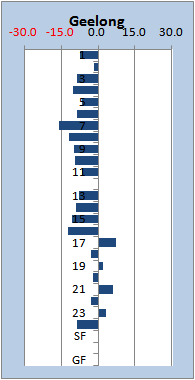 The reigning Premier missed a top 4 finish and slid down to to 6th in 2012. In the "Final-5" incarnation of the finals system, this would have been called a 'Premiership hangover', but by retaining a finals spot in the bloated "Final-8" system, there was still hope of another flag. And for Geelong, this seemed a reasonable premise, as the team was littered with seasoned finals campaigners and experienced hard-bodied players.

But our data (as charted right) highlighted very early on in the season that the Cats were off their game. The first 16 weeks brought a run of 15 straight negative results, where Geelong performed less than their ranking predicted. Even though they had a record of 9 wins - 6 losses, they were not playing and dominating teams as they had done in the recent past.
The round 17 positive result was after Geelong defeated Essendon by 67pts (the second and last +60pt win for them), and only three other positive results came after that (round 19: a 2pt win over Hawthorn, round 21: a 42pt win over St Kilda, and round 23: a 34pt win over the eventual premier).

All that said, Geelong still had a great season with 15 wins, but according to our rankings, they were well below their best all year. The Cats lost 125 rankings points during the regular season, to be the fourth greatest loss. They also retained their FootyMaths Institute ranking of second, as other teams around them wither also lost points, or didn't gain enough to knock them off.

Where to from here?
The Cats still list themselves as serious chances for a flag, and so they should. There is still a talented bunch of players, with finals experience, at hand. They are often touted as a great recruiting and development team, so there should be no reason why they cant refresh the playing list. The coach (Mr. Scott version II) is also fresh and ready for the task.
The Cats in 2013 will be an interesting case study in managing a list turnover and maintenance. 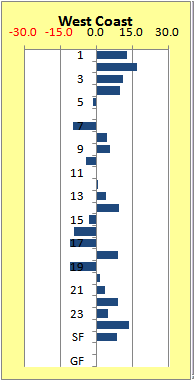 West Coast had a Grand Final berth at their feet mid-way through the season, with a great start to 2012, an advantageous home draw, and if they finished top 4, home finals. But somewhere along the way they dropped a game or two to round-out the season 5th, and travel during the finals when it mattered most.
Was it the loss to the Lions in round 10, just before the bye?
Well, looking at the chart at right, our indicators suggest there were  4 occasions the Eagles were not up to their best form on game day. The round 7 disaster to Essendon, losses to top 4 finalists Sydney and Adelaide in rounds 16 and 17, an the DerbyDarby loss in round 19.

The disappointment of the 5th place finish, and subsequent away Semi Final loss aside, West Coast came away with a positive season, after being recent Wooden spoon holders. By our reckoning, that increased rankings and rank points, and were also the best team of the first two weeks. The season also had West Coast defeating 4 lowly teams by +60 scores, but unusually they were also well defeated twice as well. Not the best form for finals football.

Where to from here?
The premiership window should still be open for the Eagles, and the list is still impressive and exciting. The home ground advantage (Paterson's Curse ...see footnotes in this link) will also fill their sails in next years' flag tilt.

But any flag tilt will need the players and staff to concentrate for the season, and win when they need to. The Eagles have that to work on, or else its another year of finals without prizes.