The final installment in our season end review series of blog posts.

And this time, its all about the top 4 teams of the Premiership season, and how they performed and why they were one step ahead of the field (well at least one game ahead anyway). And surprisingly, one of the top 4 finalists came from outside our top 4 ranked teams. 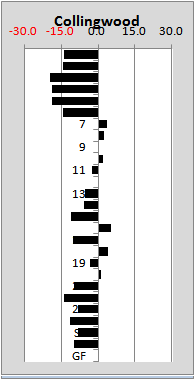 As the leading team coming into the 2012 season, expectation was high that 2012 would finally be the year that the Magpies (and Buckley, finally) win a flag. And while the season kicked off well for the Magpies (with a 9 win - 2 loss start before the bye), our ranking data suggested very early that they were not the dominant force of previous years.

Collingwood's chart shows an interesting pattern that no other team has.
- In the first 6 rounds of 2012, our data had them performing below expectation on all occasions as they netted 4 wins and 2 losses. We highlighted this form drop very early into the season, where Collingwood were clearly running cold, and picked up 3 straight 'worst team of the week' awards.
- In the next six rounds, they were 'on par' with the expectation, and racked up 6 straight wins,
- The next 5 rounds were slightly under, and the final 5 rounds even more so sub-par. Both went 3 wins - 2 losses.
- Finals matches were markedly below expectation, even in weeks where they won.

All that said, Collingwood were still touted most of the way through the season as premiership contenders, and still went on their way, winning games to get them into position for a flag tilt. But does the above data highlight subtle differences between premiership expectation, and reality? Or were the distractions off the field (in signing players, or other non-football related shenanigans...and that's a big 'Hello' to you, Caro) to blame for them dropping their eyes off the prize?

Where to from here?
The Carringbush still have excellent players in their core group, and with 'the-year-that-was-2012' under the Buckley belt, you would expect him to grow into a better coach.
We expect Collingwood to again be there or there abouts come finals time in 2013. And be aware that we will ring bells if our indicators show any slackening of performance, as happened this year. 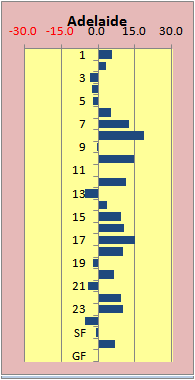 Against our expectations, and against our rankings, and under new coach Brenton Sanderson, Adelaide turned in a blinder, finishing the home and away season in second place. (They also won the Flab Cup, but we attribute ZERO value to that football farce.)
Adelaide also accumulated the second most points of  any team (behind Hawthorn) in winning 17 of 22 games.
In doing so, their FootyMaths ranking increased 2 places as they moved in to top 8 (as well as breaking the 1000 ranking point barrier). Adelaide's season saw them accumulate enough rankings points to be the second biggest improver, behind Richmond. And more importantly, the AFL's biggest improver.

Was any of this due to a 'soft draw'? Well we are prepared to concede the high accumulation of 'points scored' would be a direct result, but we remain firm that no major boost was received from any perceived benefit from the draw.
Our previous analysis has them still finishing in 2nd without the development teams. Further, in head-to-head, top-8-teams-vs-top-8-teams comparative analysis, they have the 3rd best record. We are sure they were deserved finalists.

Where to from here?
Well, when we first drafted this, there was a dynasty about to be launched from West Lakes. Then came the Tampering Affair and Tippett Overboard. Then followed the 2012 Draft Contrition, followed by the 2013 Draft Ban. And other administrative sanctions.
It is now difficult to see Adelaide being a flag chance, but then again they might just go out and win one in spite of the AFL administration.
We can't be confident in where Adelaide are headed. 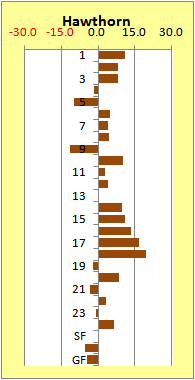 For the Hawks faithful, this is the 'Premiership year that got away'. A full understanding of how Geelong supporters felt post 2008 should be the new reality for Hawthorn. And for Geleong fans, a certain degree of schadenfreude is the order of the summer.

We had Hawthorn as our best ranked team from round 15 onward, until the end of the season.
The chart at right also highlights what we picked earlier on in another blog post; that during the latter part of the season, Hawthorn played magnificent football, well above any other team. Our blog post on the third quarter of the season (rounds 14 to 18) had the high flying Hawks playing at a rating so far above the others (about 20% better), that the premiership cup all but had their name engraved on it.

The Hawks also won 8 games by +60 margins (as well as losing one, to Richmond by 62 points), to be the seasons best club at burying opponents. The firepower the Hawks had to rub teams in to the turf, in the emphatic style mentioned above, is confirmed in the league ladder where they recorded a for/against percentage of 154.6%. This is 14% higher than the next best, in Sydney, and their 'for' score is 2679pts, 251 more than the next best, Adelaide.

All of the above is impressive and stamps Hawthorn as the premier team of the competition. But as Geelong know only too well, you can dominate a season, but lose the premiership in one game.

Where to from here?
As mentioned above, they are clearly the best team, and with continued form into 2013, there is no reason why they can't redeem themselves.
There might be list issues beyond 2013, so it will be interesting to see the development of the Hawks younger players.
Continued effort will bring reward, Hawks fans. 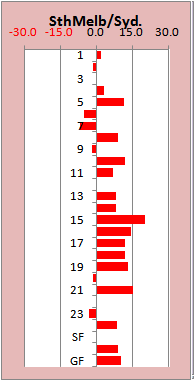 The unheralded, unfashionable Swans won the whole she-bang this year, and there wouldn't have been many that that would have tipped it. Disclosure: we didn't either!

So how did they get away with the steal of the 2012 season?
Well consistency would be possibly the best explanation to the secret of their success. The Swans were only one of three teams to not suffer drastic rankings points losses (along with Adelaide and Richmond), and the only two 'major' losses against form were in rounds 6 and 7 (a home loss to Adelaide, and an away loss to Richmond*).

Otherwise, in most games during the year, Sydney did enough to ensure the win or just miss. And they also had a brilliant patch from round 10 to 21, with 10 wins from 11 matches (equating to 10 bars to the right of the expectation 'zero' line at right), and only an 8 point loss to Collingwood in round 20 standing apart.
Lets review that point... 10 wins from 11 is impressive enough, but to win and be over expectation by such margins is super football.

You could also sheet home the win to their rock solid defence.  Sydney conceded only 1621 points in all home and away matches, the lowest of any team (second interestingly was Ross Lyon's Fremantle at 1691). That averages out as just under 74 points per game. Rock Solid, League-leading Defence.
And also, John Longmire, in just his 2nd year as coach has built another Premiership, yet seems to have been unheralded by the media.

* And we wonder if this game clouded the pundits judgement about tipping Sydney in the Grand Final... you know, the old 'can't win at the M.C.G.' chestnut).

Where to from here?
Premiership wins are meant to ensure you get the worst of the draft, but when you have canny recruiting personnel or expert development staff like Sydney, then you have the ability to trade, train and build well for the future.
Or you could just lump all of that, and other intangibles like spirit, camaraderie, and team ethic together and bundle it all up into that oft talked about Sydney Swans 'culture'.
Can purely spirit enable the Swans to rise again? Is there much more player recycling left for them? And what of 'Horse' Longmire... is he the most undervalued coach in Australia?
And what of the Tippett factor?
2013 will let us know more on all of these topics.