The second in our series of Season 2012 team reviews.

This time, its those teams that were out of the 8, oh-so-close to finals, and barring a few mistakes, a few games-that-should-have-been-won-but-weren't along the way, could have been finalists. 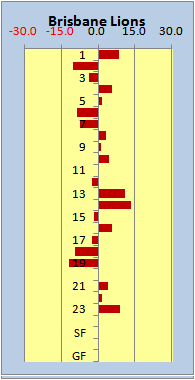 The Brisbane rebuild continues under Voss, and while 13th may not be a good result, finishing 5 games clear and winning 10 matches isn't too shabby either. The chart at right has a few poor performances, but on the whole no major losses. The worst two performances were against Carlton in round 2 and Richmond in round 19.
On the positives side, the big gains were in rounds 13 and 14, with big wins over the Bulldogs and the Demons.

But it must be said that although there were 10 wins for the season, 7 of the wins were against teams lower than themselves. But looking forward, 2 wins against Geelong and a win over the Eagles are positives that the team can build on.

The Lions mixed season also had them being beaten by 60+ scores four times, as well as winning by 60+ points four times.
Such a mixed bag that it is hard to determine any patterns or understand if they went forward or backward.

Where to from here?
The rebuild will surely continue, but after this season, it is hard to see what will happen. If there are no wins in 2013 against the top teams, then it will be another season where they are left out of finals action.
And if they continue to falter,  it may even be that they are overtaken by the Suns as well! 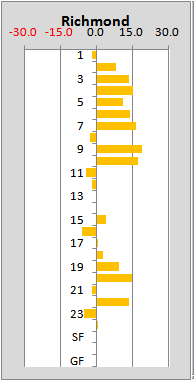 By all of our figures and data, Richmond were the big improvers of 2012. Both in terms of rankings position (up 4 places) and ranking points improvements (up 135pts).
As the chart shows, the great season for the Tigers all kicked off in the first 10 rounds, where they performed above expectations on 8 of those 10 occasions. This included wins over Melbourne, Port Adelaide, Sydney, St. Kilda and the surprise belting of Hawthorn, as well as the running Collingwood, West Coast and Geelong to closer than expected results.
This run of form, joined by a late season flourish, saw them take out 5 team of the week awards for the biggest points improvement.

Another positive for the Tigers was that they were finally able to win 2 games by +60pts, and also not suffer a similar loss themselves! Not even a traditional season opening drubbing by Carlton.

Richmond fans should also feel a bit stiff that this season is one where the finals beckoned, but errors and mistakes took that chance away from them. Close games were there to be won, as we pointed out earlier.
If they had won a few close ones (and there were 9 in round 18 under 21 point margins, plus a 22 point loss to Fremantle in round 21 and the round 23 draw), then this season would have seen September action.

Where to from here?
The Hardwick Express is gaining momentum, and the Tiger Army is keen to be on board. You would think the next season is a "must make the finals" year. If they can get out of the bottom half by mid season, the club must be thinking then Premiership window is open.
If there are still skill errors and crucial losses in close games in 2013, you could expect the board to call "ALL CHANGE" on the Express. 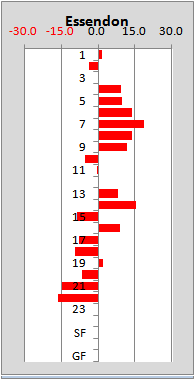 What a breakout, and breakdown, season for the Bombers... Off the runway quickly to start the season, they were flying high, with an 8-1 record, and a rankings points increase of 74pts to have them climb 3 positions on our table.
Or so it seemed. Let us remember that six those first eight wins were against teams that finished outside the 8 in the previous season (exceptions being Carlton and West Coast). Adding weight to the softness of those wins, Essendon picked up only 1 'best of the week' during that 9 week period.
Were Essendon really as good as the 8-1 record suggested?

Somewhere along the way, the wheels fell off. And more than likely it was the Essendon v Melbourne match, on a rainy night at the M.C.G. in the first weekend of June. The conditions didn't suit Essendon... wet, cold and outdoors, and they fell to the hapless Dees by 6 points.
With the benefit of hindsight, this match can now be viewed as the turning point of their season (something we alluded to earlier in the year). With that loss, Essendon went 3-10 for the remainder of the season, and wound up losing the last 7 straight. Those games shed 35 rankings points, almost half the rankings points gains they had made earlier. And in those 10 losses were 4 by more than 60points (Rounds 15, 17, 18 and 21).
Admittedly, they did play 6 of 2011's top 8 teams, losing all 6.

Yes, arguments can be mounted about injuries taking toll on the players available but all teams have the same list numbers, so it its actually highlighting a lack of depth. We won't take any commentary about injuries affecting the season. Teams have lists with enough players for cover. Depth people, depth!.

Where to from here?
A star player recruit will help, but the younger listed players must now step up. The challenge will be to develop a reasonable list.
Also, there is no doubt the charm offensive that is the Hird factor will ensure the Bombers maintain a high (and protected) media profile. More losses though would tarnish that reputation. Another interesting sidelight for 2013. 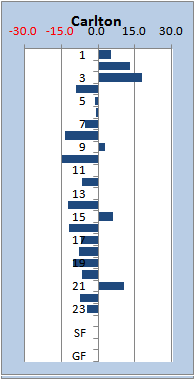 Like Essendon, 2012 was a season of such promise for Carlton that resulted in nothing but dust. That famous headline and press conference will be the lasting low-light for the Blues... It was all within grasp, but something somewhere conspired to collapse that bubble.
In fact, looking at our chart at right, the Round 3 win against Collingwood that inspired those headlines was the last of three strong season opening performances over and above expectation, with only three others (Rounds 9, 15 and 21) for the rest of the year. From that point on it was mostly negative territory for the Blues.

And, as is now well documented, when the crunch came with that Round 22 loss to the Suns, there was 'blood spilt' with the axing of Brett Ratten.
It seems quite odd that both the Blues and Bombers promised so much, yet both missed the finals. Maybe the footballing news cycle needs to be wound back a bit, so that the week-on-week hyperbole about 'flag favourtism' is reduced.

Where to from here?
Malthouse has inherited possibly the best list of players in his first year at Carlton than at at any of the other clubs he has coached. This will test his coaching credentials.
Is he a developer of talent, or can he take a solid list and convert them quickly into a flag winning prospect?
Had his thoughts and strategies on the game been over-taken? Was the final year at Collingwood evidence of that, or were other troubles to blame for missing the back-to-back flag chance?
So much to watch at Carlton in 2013. 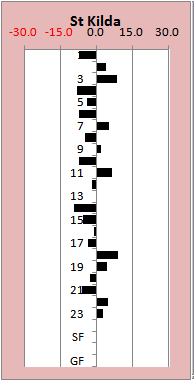 Looking across all the 2012 charts for all the teams, the one at right is the most plain and 'whitebread' of all the teams. No huge gains, no huge losses. For a team with an aging list and a new coach, to have held the season together as they did has been quite an achievement. Along the way they had 6 wins by 60points or more, but most were 'expected results' (against the weaker teams) which is why there is no huge positive spikes on the chart.

The Saints missed the finals in 2012 for the first time since 2007, but Scott Watters should take heart from the steady but ultimately unlucky season they had. As we noted before, the Saints have had some tough luck (or mental fragility) under Watters that they didn't have under Lyon.
If they had have won those five games that were losses by 13points or less, then they would have made the finals.

Where to from here?
Watters as a new coach has plenty to do to apply his footballing style to the Saints. The first season past has shown that he has already made changes that have had an impact. St Kilda are a higher scoring team than under Lyon, and he was also able to stabilise the team after a leadership change.
The 2013 challenge is to maintain position, return to finals, and manage the older list and freshen up the talent. Lots to look forward too next year.

Up next... the finalists!