The AFL has trumpeted quite a bit in the off season about how this draw would be better and fairer than in previous seasons. Back in October 2012, the draw was announced (see: "Fixture fairer in 2013: AFL"), with the AFL wheeling out Gil McLachlan and Simon Lethlean to discuss the mechanics.

The key to the 2013 system is to work primarily to


"trying to achieve all these things like big match ups, the big crowds, all those contractual obligations and the broadcasts"
(Simon Lethlean).

To that end, they have basically attempted to fix the schedule such that the better performed teams of 2012 tend to play each other twice, and likewise for the lesser performed teams.
Certainly one way to attempt to balance the draw and season, to reduce blow-outs etc.

Also at that time, Rohan Connolly and The Age also ran their slide rule over the fixture, and completed their own analysis (see: "No easy draw for the top sides in 2013") ...more on this below.

To complete the trilogy of fixture assessments by The Age, they also issued the traditional "Club-by-Club" analysis (see: "2013 fixture: club by club analysis")


As we also did last year (well twice in Nov 2011 actually), we will also today show our analysis of the draw based on our rankings data. And with The Age attempting to apply a metric to their draw analysis, by using 'ladder position' etc as numerical determinants, it should be an interesting comparison.

The Age / Connolly Analysis:
The Connolly analysis, tabled at right, attempts to quantify the AFL's drive to balance the season through The Age's own form of FootyMaths.

Its a fair assessment of the fixture, and even takes into consideration 'six day breaks' between matches.

According to that analysis, the bottom 6 teams of 2012 get the best of the draw. The exception is the Western Bulldogs, who get bumped to be just outside the hardest drawn 8 teams... which is odd.

Equally odd is the assessment of the draws of Essendon (6th best), Adelaide (7th best) and Carlton (8th best).
Quite astonishing that the Crows, with a second place (home and away) finish in 2012 should get a 7th ranking.
To see Essendon and Carlton, both 2012 non-finalists, with a reasonable draw is fair given the AFL undertaking. It will be interesting to see if it becomes a talking point during the year.

At the other end of the table, 2013 is quite the challenge for North Melbourne, with the second toughest draw.
As expected, tougher draws to the top 6 teams (excluding Adelaide) was also expected.


FootyMaths Rankings
But that is enough of that, lets look instead at a few metrics based on our rankings data.

Metric 1:  Rating against your opposition
The first is to accumulate the oppositions teams rankings points for each team and order the teams accordingly.
These rankings are based on this calculation [1]: 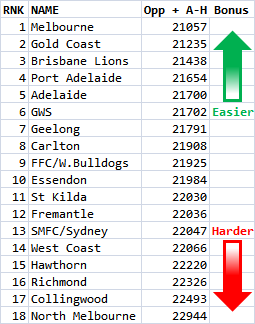 This gives the table as at right, with an easiest draws to Melbourne, Gold Coast, Brisbane, Port Adelaide and Adelaide.

Our basic assessment brings:
- The easiest draw is given to 4 of the bottom 6 clubs, with Adelaide dipping into 5th best.

- The toughest draw to North Melbourne above all others, with Richmond the only non-top 8 teams to to figure in the toughest 8 drawn teams.


In all of the data at right, there is a pattern that shows what the AFL have achieved is basically as they wanted... the weaker teams are receiving a better draw, and the stronger ones a tougher draw.


The next metric expands on the above.


Metric 2:  Rating against expectation
As we also used last year, a more accurate reflection of ranking the draw incorporates

This produces the table below. 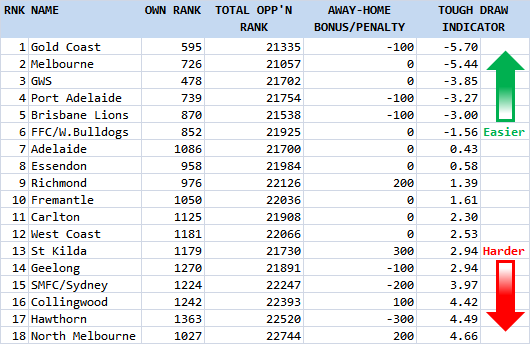 Now, working under this method, the objective of placing the weaker teams to play more amongst themselves is realized with the bottom 6 teams all getting the best draw rankings 1 through 6.

At the other end, we still see North Melbourne as having the toughest draw. And of the remaining top 8 teams, seven of them get into tho the top 9 toughest draws.
Again, the glaringly obvious exception is Adelaide, who get the 7th easiest draw, conspicuously the best draw of any team outside the bottom 6 teams.


Closing Comments
The AFL have tried to create a "fairer draw", but we still consider it compromised, to say the least. The attempt is really to reduce the possibility of lop-sided games and also to increase blockbuster games and drive revenue.

True balance comes from thinking beyond the base dollars and fear of embarrassment of score lines.
We will address our approach to a draw approaching true balance soon.

[1]: For the sake of determining 'home matches' the below was used:

- any Victorian team playing an interstate team in Melbourne/Geelong is considered a home game.

- any interstate team playing any one outside their state is considered a home game.

- Victorian teams playing against other Vic teams, and the local state derby's are (of course) considered neutral.

- Vic teams playing 3 or more games in any single non-Victorian location are accorded a home game status (Example is Hawthorn at York Park). This is also applicable to the GWS playing 3 games in Canberra.