In previous posts, we described our proposal for change and the reasoning behind it, as well as detail on implementation.

In this post, we look at other areas outside the main playing season that the reforms can impact on.

EFFECTS ON 'OUT OF SEASON' EVENTS

Before we detail how our system of conferences influences the draft, the pre-season competiton and the following seasons conferences, a point on three conference models. 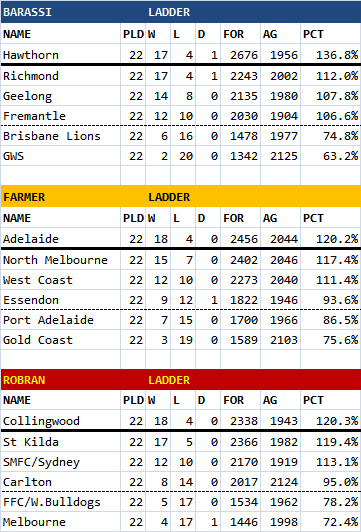 As we have seen in the previous post on the finals, a three conference system is difficult to fit into any normal linear system, or an even numbered team system.

Accordingly, we consider the best approach to determining the (lineal) draft order, and the (lineal) re-ordering of conferences that we described in the original post, is to merge the three conferences back into a full 18 team ladder, based on merit.

So as a preamble to the below, the merging of the three conferences at right (from our worked example listed in the previous post) into a single, merit-based ladder, produces the table as below. 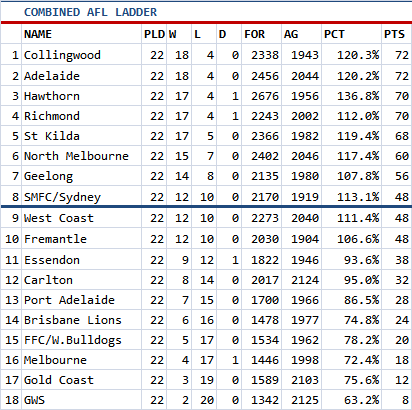 From this table, the draft is easily set and the next seasons conferences can be re-drawn.


EFFECT ON THE NATIONAL DRAFT
To arrange the draft order, the AFL need only revert to the re-combined ladder (a single 18 team ladder as above).
Under this modelled example, GWS get first pick, followed by the Gold Coast, Melbourne etc.

We propose no further changes to the draft system.


EFFECT ON THE PRE-SEASON COMPETITON
The model we propose fits inside a regular 22 round season. We see no need to alter the format of the pre-season competition as it stands today.


EFFECT ON FUTURE CONFERENCE SELECTION
As per our opening statement (Principles), the only path to a fair conference system, is by altering the make-up of the conferences season-on-season.

Only by re-drawing the conferences each season can you remove any perceptions of imbalance, or powerful / weak conferences. With the competition geographically compromised by 10 teams (more than half of the whole) in the one market, Victoria, re-configuring the conferences annually distributes the Victorian teams, as well as varying each teams travel requirements.

As per the second post (Detail), the conference selection method we have elected to use is a seeded system to attempt to balance them. As per that system, the following teams fall in each group.

Which from the worked example, in the combined ladder above, yields the 2014 conferences as below.

Again, this seeding selection provides each group with two teams from the top 6 teams, two from the mid-table 6 teams and two from the bottom 6 teams.

In this season, there are
- two conferences that have 2 interstate teams in them, and one that has four,
- the two Adelaide teams and the two Sydney teams are now not pooled together,
- the Queensland teams and the West Australians are pooled together,
- the Melbourne 'blockbusters' look to be based on Collingwood having 2 games against Carlton and Geelong, though Hawthorn v Richmond should also draw a crowd.
- The one Collingwood v Essendon game can still be reserved for Anzac Day.


The seasons draw then falls out of this with teams playing 10 games inside each conference and 12 outside the conference, as we described previously.


As before, our proposal brings transparency to the draw, and removes the gerrymanders of the current fixture. It still leaves open the AFL to schedule blockbusters into appropriate dates, as well as provide some randomness to each seasons draw.
Posted by The FMI at 11:37