As mentioned in previous posts, we are reviewing our rankings algorithms for next year.
Below is an example of what we are hoping to achieve. In this instance we have doubled the 'game rating' value, which will actuate more movement in rankings points on a week to week basis.
The week to week changes under thus now system will be added to this page (shortly) weekly for reference.
Until the end of the 2012 season, the main page and posts will all be calculated on the current system.


GRAND FINAL TIP
While we have a break, this page wont be updated, but just to put this system on the record for the Grand Final... here is how these adjusted tables calculate the Grand Final Winner and margin.

Which is only 1 point less than the original calculations tipped here. 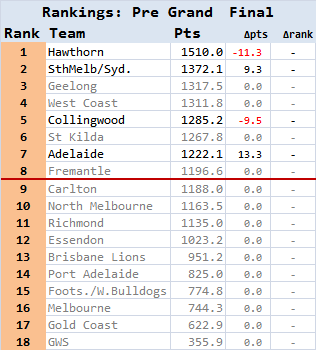 - Adelaide challenged the Hawks all day and ran them to within a goal and under the predicted margin. They receive a gain of 13pts, while Hawthorn copped an 11pt penalty.
- Sydney pick up 9pts after a bigger than expected win over Collingwood, who subsequently shed 9pts as well. 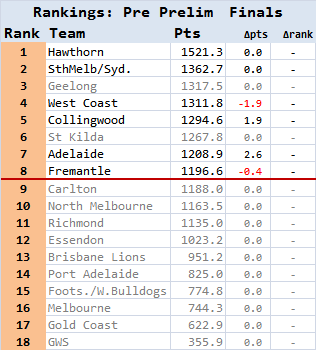 - West Coast  and Collingwood share a 1.9pts change, with the Magpies gaining and the Eagles dropping.
- CORRECTED: Adelaide just breached the projected tip so achieve a modest gain, while Fremantle drop by a fractional amount.
- Fremantle's run of good late season form has them move up to 7th, after this week competing well with Adelaide and going down by 1 point of our prediction.
Their +20pt is formed mostly from a legacy of the Dockers great run over the last few weeks.
In no way is this a 'channeling Roby' style movement of 'losing but gaining'. 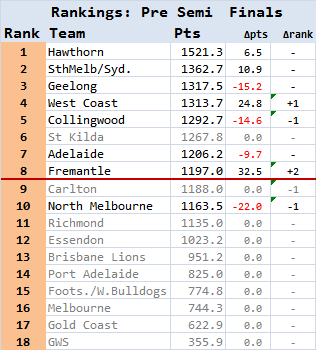 - Hawthorn and Sydney consolidate their positions as the leagues best two teams.
- Geelong slip perilously closer to the Eagles in 4th, now only 4pts away.
- West Coast take flight and climb to 4th as the Magpies were humbled.
- Former ranking leaders Collingwood (at 1552pts before Round 1) slip to 5th and 1292pts.
- Fremantle's run of good late season form has them move up to 8th, after last week moving to 10th (jumping over Richmond). This week they slide past North Melbourne and Carlton. 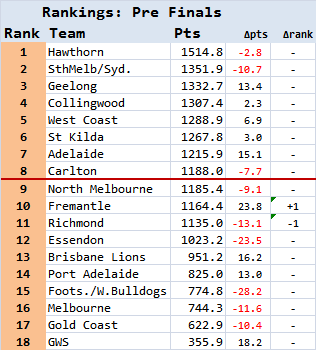 - Hawks finish the season ~150pts clear on top, with Sydney in second.
- Carlton slip to be within 3pts of North Melbourne, and if the Roos have a good showing v West Coast, they could get 8th spot.
- Fremantle's run of good late season form has them move up to 10th, jumping over Richmond.
- There will be more changes with the finalists in action, but until next year there will be no changes for teams 11th to 18th. 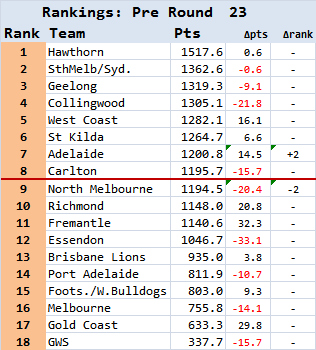 - Hawks still ~150pts clear on top
- Collingwood's big loss puts them closer to West Coast in 5th spot.
- Adelaide, who fell from 7th to 9th after a shock loss to Brisbane last week now reclaim 9th after defeating Melbourne.
- The Crows take the place of North Melbourne, who do the opposite and drop from 7th to 9th.
- Both teams danced about Carlton, who hold 8th, but only by a margin of 1.2pts
- Fremantle and Richmond both improve and leave Essendon 100pts behind. The Dons are also only 100pts ahead of Brisbane. 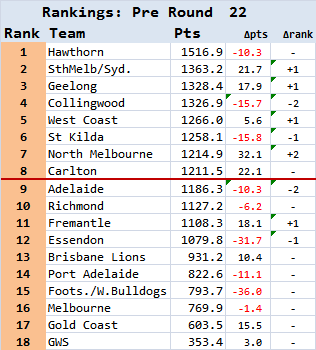 - Hawks still ~150pts clear on top
- Collingwood get dumped from 2nd down into 4th as Sydney return to the 2nd best team.
- Geelong move into 3rd, a mere 1.5pts in front of Collingwood.
- Adelaide, after the shock loss to Brisbane drop from 7th to 9th.
Taking their place is North Melbourne, who do the opposite and burst up from 9th into 7th.
- Both teams danced about Carlton, who hold 8th
- St Kilda and West Coast also exchange places in the 8
- After Richmond skipped over Essendon into 10th last week, this week its Fremantle who leap over them into 11th. The Bombers now the 12th best team.
- The Bulldogs continue south, about to dive beneath 16th placed Melbourne. 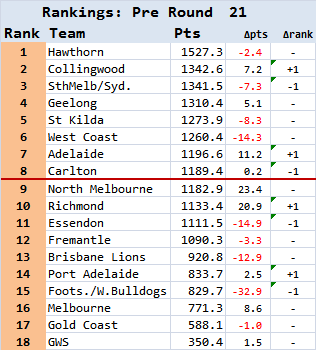 - Hawks still ~180pts clear, and Collingwood return to be second place holder.
- Sydney drop to 3rd, but only by 1.1 points
- Adelaide power above Carlton into 7th.
- The Blues hold onto a top 8 position by 7pts from North Melbourne in 9th.
- Richmond skip over Essendon into 10th, as another Bombers loss sees them drop to 11th.
- Bulldogs fall to 15th, replaced by Port Adelaide in 14th. 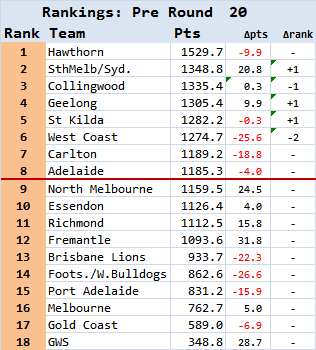 - Hawks now 180pts clear of a new second place holder, Sydney!
- West Coast slip up against Fremantle and drop to 6th.
- North Melbourne continue their climb, in 9th and now 26pts out of the eight.
- Bulldogs remain in 13th after 14th placed Port Adelaide also lose.
- GWS's win boosts them 29pts, but they remain adrift at the bottom, 240pts away from the Suns. 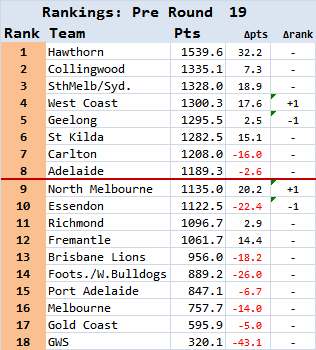 - Hawks 200pts clear in the lead (equivalent to gap between the 2nd placed Magpies and North Melbourne in 9th!) - an un-assailable lead.
- Swans and West Coast continue to close the gap on the second placed Magpies.
- Geelong win, but West Coast still move over them into 4th.
- Bombers big loss sees them now 10th.
- North Melbourne continue their climb, now in 9th after last week moving from 11th to 10th.
-GWS adrift at the bottom, 270pts away from the Suns (equivalent to the gap between the 17th placed Suns and 1th placed Bulldogs) 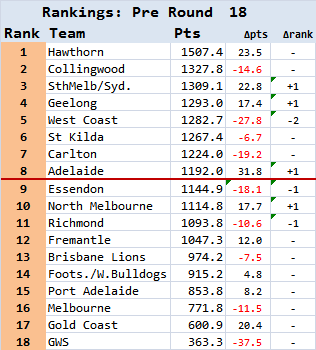 - Hawks increase their lead and now really put a gap in them.
Swans continue to climb up the rankings, now 3rd and under 20pts from the second placed Magpies.
- Geelongs biggest win of the year boosts them to 4th.
- Bombers slip up again, and this allows for the Crows to slot into the 8.
- North Melbourne also overtake Richmond after their head to head clash on the weekend. 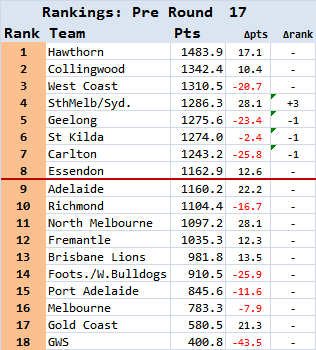 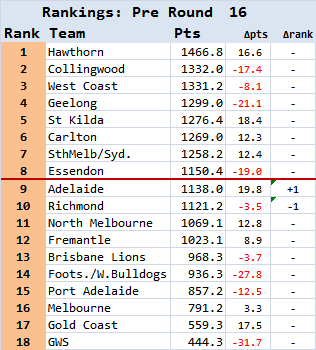 - Hawks increase their lead.
- West Coast are now so close to third as the Magpies keep slipping.
- Geelong also sliding and could be out of the top 8 by years end.
- Bombers failure opens up 8th spot again, with Adelaide chasing hard. 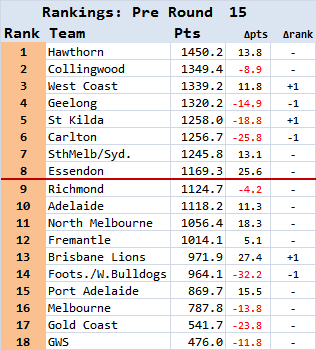 - Hawks increase their lead.
- West Coast challenge for third.
- Bombers cement 8th, but still tight with Adelaide and Richmond, all within 50pts.