Last year, with little fanfare and even less acclaim, we looked into the crystal ball and predicted the 2012 seasons winners and losers.
And at seasons end we were found wanting in a few areas, but scored quite well overall.

So after an off season of adjusting and streamlining our all powerful computer and her algorithms  we offer this seasons look into what may come.
In preparing the data, we used the full schedule for season 2013, and used our team ratings to determine match scores within a randomised calculation based around limits determined by the rankings. Iterations were run, and all data collated to determine 'windows of performance', with the averages used to split teams where needed.

Not those ones, the ones at the bottom
Quite simply, we along with possibly most of the football punditry, can't see the bottom two places filled by any teams other than GWS and Gold Coast.
Our calculations see;


- the GWS not finishing anywhere other than 17th or 18th, and only collecting between 3 and 0 wins for the year.

- Gold Coast faring better, and possibly winning as many as 5 games for the year, but also a few as 1. In terms of ladder position, 16th to 18th is possible, with 17th the most common result.


- Melbourne, after another off-season from just down the road from hell, are tipped to finish with 3 to 7 wins, with 6 a fair result. Ladder wise, we expect them to be between 14th and 16th.

- Also in this tier fall the Western Bulldogs, with an expectation of 3 to 9 wins. This could put them into anywhere between 10th to 16th. The 9 wins / 10th place finish could be considered an 'outlier', but we consider this 'possible, but unlikely'.


Half a dozen is our worst case scenario
The next tier brings teams that are expected to win about 6 games minimum.


- Sneaking in here is Port Adelaide, who average out at 6-7 wind per year, though their minimum predicted number is 5. At best we have them winning a respectable 10, but that 8 to 6 is a more fair estimate. This yields them ladder positions of 11th to 16th.

- Surprising to some, we have Essendon winning between 12 and 6 games, with 8-9 games won on average. Ladder wise, that is anywhere between 10th and 14th.

- Brisbane also fit into this group, as we expect them to finish anywhere between 9th and 14th. Similar to the Bombers, that's a 12 to 6 game winning season.


Battling to fill the last two finals spots
Now we enter the more difficult to split area, of teams that could end up in the top 8, but also could finish 10th. These are a closely bunched and ranked group of teams that includes:


- North Melbourne, having had a great 2012, find themselves as victims of their own success. As we pointed out in our analysis of the 2013 fixture, they have copped a tough draw. This then reflects on our predictions, to position them anywhere between 6th and 12th at seasons end, with between 13 and 8 wins.

- Carlton look by our figures to be missing out again on the finals. The Mick Malthouse factor might influence that, but their rankings drop in the latter half of last season doesn't help. We give them 10 to 14 wins and a finishing position, like North, between 6th and 12th.

- With between 14 and 11 wins, we find St Kilda to also be scrapping for a finals place. The Saints would place anywhere between 5th and 10th, though the 5th place finish is only a single data point. More realistically, 7th to 10th is expected.

- Possibly finishing 9th (again) is Richmond. Our numbers bring 11 to 16 wins, and a finishing position anywhere between 3rd and 10th. You can guess that these results are the most diverse generated by our system. The punditry, on the whole, put the Tigers into the 8, and we expect that too.

- After a great season 2012, and with a steady ratings boost during that year, Adelaide should be expected to perform at the same level in 2013. Our data though has them finishing, like the Tigers, between 3rd and 9th. That is a 10 to 17 winning game season for the Crows. Given their 2012 form, they would expect to make the 8, but there is a chance they could falter as well.


Making the top eight is mandatory
These teams, by our rankings and calculations never miss the top 8 (bar one example).


- Fremantle are expected to win between 13 and 16 games and finish between 4th and 7th. Their expected performance data shows them as our most consistent team. A lock for the 8? Lets see how the year plays out.

- West Coast could finish anywhere between just making the finals, to ladder leaders (1st to 8th), with anywhere between 13 and 18 wins. The home ground advantage that they have should see results on the higher side of those numbers.

- The one team we have found that is most likely from this group to miss the finals is Geelong. Calculations have them winning between 18 and 12 games to finish between 2nd and 9th. Again this season comes down to the ability of the older players to continue and the development of the youth.

- Premiers Sydney are difficult to split from Collingwood this season. Both, using average number of wins, turn in a figure of 15.9 (make it 16 wins) for the year. The spread favours the Pies, who might win 19 at a maximum (to the Swans 18), and both should win 13. Ladder-wise, it Sydney from 2nd to 8th, and Collingwood from 1st to 6th.

- Which leaves Hawthorn, our top ranked team. Like Collingwood, 13 to 19 wins is likely. In terms of ladder position its anywhere between 1st to 8th for the Hawks, but there is a big grouping of 1st's, 2nd's and 3rd's falling out of the calculations. Anything less than that would be a bad result for the Hawks.

Representing these graphically, the expected number of wins: 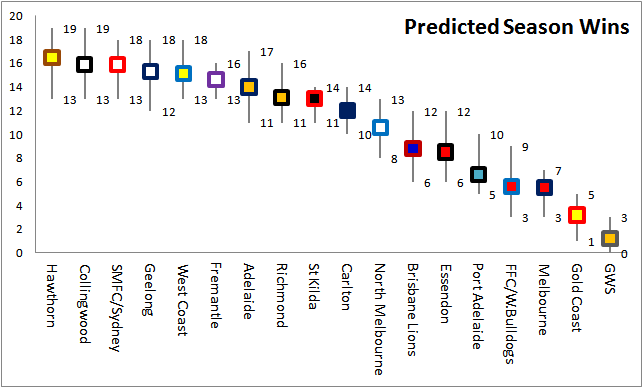 and the probable ladder positions: 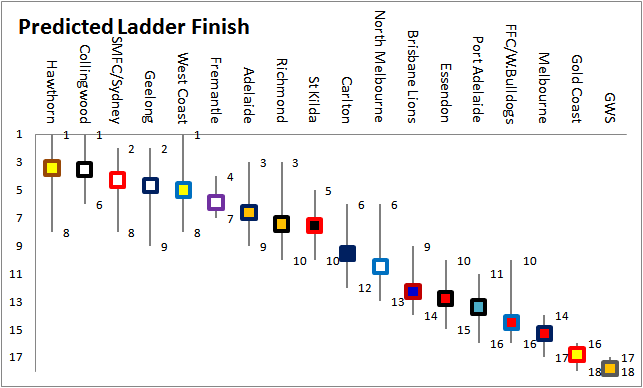 We will review at seasons end.
Posted by The FMI at 13:23