The week that was 11 days, is finally over. The football world can now breathe a sigh of relief.
For it was an 11 days of footballing hell... One round, 11 days from start to finish, 6 different days that matches were played on, and 5 different days of the week involved.

Spare us that type of torment again, please AFL. Can we just get back to basics and have 9 games over 3 days? Please!

Add to that, it was a week of upsets for most tipsters.

And for us, well after the first weekend being 0-2 down, the hope was to pick up the rest the following week. 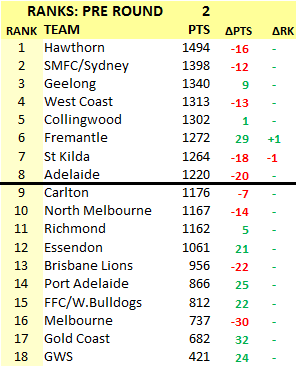 Instead, after Thursday we were 0-3, and the after Saturday we were 1-5. Sunday brought comic tragedy, and a net result of 2-6. And when the final siren sounded on the longest-of-the-long VFL/AFL rounds of footy we remained at 2 wins from 9 games.

Five of our top 8 ranked teams all lost points, with Collingwood almost joining them.

After the Western DerbyDarby, Fremantle looked to have the biggest gain, but they were pipped at the post by the hard running and tireless Gold Coast Suns. Their win netted them 32 points to be the best of the week.

At the other end of the spectrum, we tipped Melbourne to defeat Port Adelaide (and they really ought to have, too) but in a performance that depressed even the most rusted on Dees fan, they lost badly and also picked up our worst for the round and a loss of 30 points.


Bonus promo... get on over and read "Following the Dogs", a new blog charting the Western Bulldogs' season. And what a way to start with a handy thrashing.


What a round.. we were losing games like Spinal Tap were losing drummers.
Vomit... just vomit.
Posted by The FMI at 22:16