In using mathematical models to tip, a week like Round 1 shakes your confidence. Taking the emotion from tipping should yield better results.
And with model-based tipping, stern hands are needed on the tiller, and no jumping at shadows should be entertained.

Faith placed in the model has be restored the following week.
We have normality, with a big 8 correct from the 9 games played AND close margin tips on several of the match-ups.


THE RESULTS:
We missed only the first game of the week, which could be down to not correctly predicting the rate of Richmond's ascendancy, or the speed of the decline of St Kilda... will let you choose which one.

We were very close on the margins for Fremantle (out by 7pts), Adelaide and Collingwood (out by 4pts), and Port Adelaide (out by 1pt).
This is the sort of tipping we want to see... not just being correct, but on the accuracy of the margins. We scored over 100 on the Monash Uni competition, which is our target. 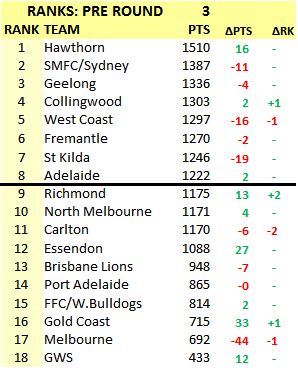 Not sure anyone would have been able to have predicted the scale of the defeat for Melbourne. Such a loss has them dropping 44 ranking points and slipping below 700.
It also has them now sitting 17th, having been overtaken by the Gold Coast.
This is the first time any of the expansion clubs has moved from either 17th or 18th positions.

And we should mention that Melbourne's loss is not the only reason the Suns have progressed up the table. Their round 1 win, and a round 2 defeat by significantly less than expected has seen them gather the most rankings points for 2 weeks in a row.
Kudos to the Suns.

In other changes, the Magpies and Eagles swap in 4th and 5th, and Richmond and Carlton also dance about North Melbourne. All those teams are sitting between 9th and 11th, separated by only 5 points.


For the Melbourne fans... stay on board during these tough times. Something good will come.
Don't get off the train!