The week that was dominated by
- Melbourne's massive loss and subsequent upheaval that cost them a CEO, and
- Revelations that the Essendon coach was injecting non-WADA approved substances that cost that club... well, no one
... is finally over.

Topping off that week was the following for the key clubs, and the AFL in general.


- Melbourne put in a spirited performance against the Eagles being competitive for a half of football. Baby steps and slivers of sunlight they may be, but any slight improvement at Dee-land should be welcomed and celebrated. It is a long road to travel, and the first step has been taken.

- Essendon defied the critics and came out and won a thriller in Perth. The Bombers are now 3-0 and lead the league. Performances under such pressures needs rewarding, and we praise their resilience.

- All of that aside, the reality of the Bomber existence was spelt out by The Age on April 11, and again on April 13. Corroborated evidence and lax medical protocols impose a negative image on the club and football in general. A bad look for a competition that tries its utmost to preserve and enhance its brand.

- The flow on effects of the ACC report into Organised Crime and Drugs in Sport are also yet to be fully followed through on, and as per Jake Niall, it could affect even more than the Bombers.

There is still much hanging over this season.


THE RESULTS:
The weekend was topped and tailed with missed tips... Port Adelaide and Essendon souring the weekend.
That said, 7/9 is on target to meet the end of year target. Happy with that!

And again it is nice to be close on the margins. This week, it was the Geelong tip (1pt out) and the St Kilda tip (10pts out... but in a blow out that's a fair effort, we think!). One of only two Monash Uni tipsters to get close on that game. 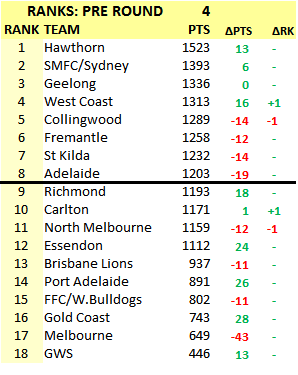 Again, the tale of the week is the Demons spiral down to the basement. As they dropped another 43pts, The Gold Coast again performed better than expected and secure 28pts. This now sets the Dees firmly adrift in 17th, just under 100pts from 16th.

There is also a log jam building in and around our top 8 teams. There are 5 teams within 100pts of each other in 5th to 9th spots. Richmond gained further this week to push for a top 8 spot, while 3 of the 4 teams above them lost, and all 4 dropped rank points.


The below is not for the Dees fans (stoic as some of them are), but for the AFL and its brand.