An interesting weekend that showed...


- Essendon just keep on doing it, despite the external pressure.
- Richmond look like they have it, but are they good enough to challenge?
- Melbourne stared into the abyss before stepping away to find it.
- Geelong & Sydney still have it, the latter just misplaced where they put it.
- Hawthorn still have it, and are rationing it to do just enough.
- West Coast have lost it, and cant even find it at home
- North might have it, but need to keep it together and on the ground for more than one quarter.
- Port Adelaide had an off-season clean out, swept away the cob webs and brought in a coach who has it.
- The Bulldogs, who thought they had it after round 1, really don't, and Adelaide who had it last season, maybe don't this season.


THE RESULTS:
Only the 6 right this weekend, but still close margin tipping on Hawthorn, (out by 3) and Adelaide (out by 1). 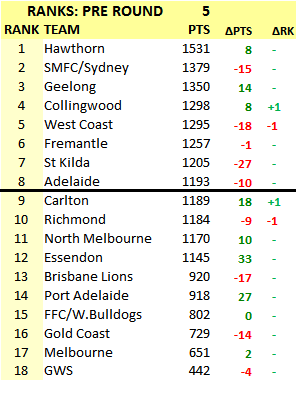 Still its the Hawks well out in front, and with the Swans dropping a game, they stretch that lead. Sydney and Geelong follow but are about 200 points behind.

Collingwood and West Coast exchange places in 3rd and 4th, as does Carlton and Richmond just outside the 8.

At the other end. Melbourne go up 2pts for a total season loss of 116.


Genuinely thinking that this season we are headed for an accuracy rate as good as Homer...