Another footballing weekend that was really 4 days has gone, and the only true lesson learnt was that the Saints are just as rubbish in another country as at home.
...No, wait. We learnt that two pre-seasons ago when some 'photos' appeared.

Oh well. Any other lessons?


And how could this happen? How could 6 'confirmed*' players be allowed to play? Where was the accredited AFL media on this?
If it were a Chinese swimmer, you bet the sports media would be bleating a different tune.

And speaking of football media... scratch that - the non-embedded AFL-schmoozy football media, you know - the ones getting in and doing the hard yards on this issue, try this on for size. Read the tweet, click the link, open your mind and read the article.


My latest column on @theroarsports asking whether AFL players should be open to bans re doping - theroar.com.au/2013/04/29/sho…
— glenn mitchell (@MitchellGlenn) April 29, 2013

* Yep, confirmed. The Essendon Football Club said as much. No ifs, but, maybes or legal-representation-at-ten-paces.


But enough of that sordid stuff... back to the rankings and ratings and stuffing up the tips!


THE RESULTS:
It seems that even though we altered the calculations to be more responsive, we haven't still been able to accurately get a handle on just how well Port Adelaide and Essendon are going.
Those two games again cost us a sweep of the board.

Not a single blow-out this week. We expect a different result next week though... a weekend of carnage likely! 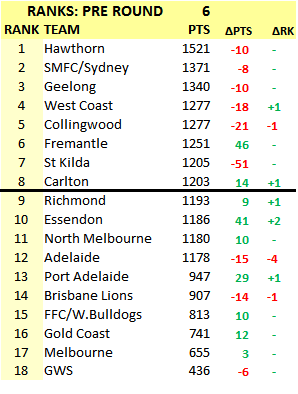 Massive movement this week on our rankings table, led off by a 4 position fall by the Crows. They fall outside the top 8, replaced by Carlton.

The Blues have been less than impressive this season, but a win over Adelaide by more than the expected has them jump to 8th.

Richmond's close result and the high flying Bombers both move up the chart too. North Melbourne also impressed, picking up 10 points, but fail to change positions.

Port Adelaide also change places with Brisbane near the foot of the table. The Power are the second most improved team of the season.
Posted by The FMI at 22:29