As mentioned in this rounds preview...


"your Sunday plans should involve getting out of the house...
Do some work in the garden? A trip to the Zoo? Winery tour? Golf round?"

As expected, three games tipped to be near blow-outs, three games that went beyond our expectations and nudged into the blow-out bin.

The only positive for us out of that set of games is that our average margin tipped was out by just over 1 goal on average.
Not too far away.


The surprising change to the rankings this week was, as we tweeted about Troy Wheatley's rankings...

The internets may break as you read this, but Roby is right!!!
You can win a game (and win 6 in a row) and still drop in the rankings.
Troy Wheatley's blog has them down, and we have them down.


Why? Well I'm glad you asked*.
Essendon, who were expected to win by 88 points by our calculations ... didn't! Even the historically conservative 3LO / ABC Grandstand Football team were talking up that the Bombers should be looking to win by +100 points!
The 39 point margin, less than half of expected, penalises the Bombers 11 rankings points. Simple rule... if you dont cover the expected margin, penalties apply.
The contrary view is that the GWS did so well (in not getting belted), that they gain 18pts.

And in the week where Andrew Demetriou suggeted that 'scurrilous innuendo' should cease, Essendon turn up and allow the GWS to lead for two of the four quarters. (Feel free to contact us with your outrage bookies... I could do with the laughs).

THE RESULTS:
No point talking up out tipping prowess this week... many, many tipsters would have picked the nine. We called it on Friday... easiest tipping week of the season to date.

Where we can talk up our tipping skills is in the margins.
Of the nine games tipped, we got 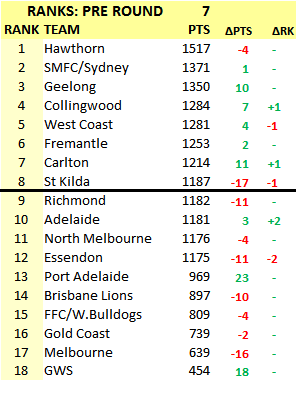 Our table seems to have a tiered structure now, with the Hawks clearly dominant at the top, with Sydney and Geelong in the second tier.
A third runs from 4th place to 12th, where just over 100pts separates the 9 team.
Three final tiers exist, with 13th to 15th in one bracket, Gold Goast and Melbourne in another, and the GWS clearly at the foot in another.

This week, with so many games being close to 'as predicted', our rankings points have changed only by small increments.

As before, the Bombers and Adelaide change as well.

* Bonus Footballing Thermos educational clip, from the team that brought you the term "...well, I'm glad you asked!".
Posted by The FMI at 10:24