A refresher on rankings and how they work.


1. Every team has a rank, and every game gets an expected result based on those ranks.
2. If a team wins and betters the expectation, they get an increase in ranking (and the other gets a reduction).
3. If a team wins but does not reach the expectation, they receive a 'non-performance to expectation' penalty  (and the other team gets a ranking increase as they performed better than expected).
4. If a team is expected to win, but doesn't, the same principle applies in 3, but to a greater extent.

Using this method, you can, with a reasonable degree of accuracy, rank teams over any period regardless of competition, as each team has a ranking and they are expected to meet performance level versus (NOT VERSE) that team.

So for example (using our rankings, or the Forecasters', or Troy Wheatley's):


CASE A   If Collingwood were to meet Hawthorn , there is a fair expectation that they would lose. We would pin that at about a 4 goal loss now. If Collingwood get to say, 4 points, then they get a rise. An 5 goal loss is a rankings drop.

CASE B   If the Bulldogs were playing the Melbourne, we pin that as a 3 goal win to the Dogs. Again, if the Dogs win by more, then they get a boost in rankings points. A win less than that, or a loss, means a deduction.

So by using rankings you can determine improvements (or otherwise) in teams without needing to play either the full home-and-away schedule, or even playing each team once.
There is an 'independence' away from the draw. It doesn't matter if teams play weaker sides or not, as the expectation against a weaker side is factored in. If we mix Case A and Case B, Collingwood now should be looking to defeat Melbourne by about 10 goals to preserve their rank.

So, that is how we (and I assume Troy Wheatley and the Footy Forecasters) benchmark teams, week in, week out.

Why this refresher in Rankings 101?
Well Mark 'Stevo' Stevens tweeted this, which we think is an unfair comparison.

This is unfair, because it doesn't take into account the strength of the opposition.
Our assessment is that in season 2013 to date, Collingwood has lost 28 ranking points, while the Suns are one of the big improvers, up 116 points.
And, of course, the two teams are still very much separated on the rankings charts.

OK... enough of the mechanics of rankings!


THE RESULTS:
BLIMEY!
What on Earth happened here...?

As we were sailing away into another perfect tipping weekend, the Suns bobbed up and knocked that chance (and the Dees) into the dumpmaster.

And then to add insult to injury, Carlton were a complete rabble for 3 quarters and couldn't defeat St Kilda.
Which means in the last two games of the week, which we admittedly thought as the toughest two of the week to tip, cost us another big 9.

But tipping is tipping, and thems the breaks.

Nice to get a solid run of results under the belt now, and even better to be still getting them in and around the mark. This week West Coast off by 1, and Hawthorn off by 10.

The biggest disappointment came in the last two, where Melbourne were expected to win, but failed miserably. Another massive loss of 29 rankings points this week, bringing their total season change to be -157pts. 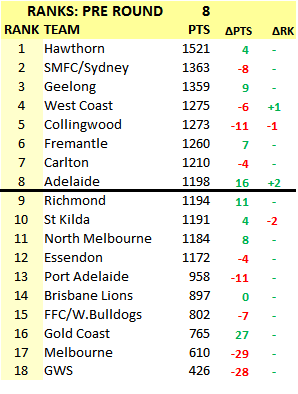 This also entrenches Melbourne below the Gold Coast.

From the Suns side, a first win in Melbourne is a wonderful spur for their confidence, and they also are now 150 rankings points above Melbourne and about to strike against the Bulldogs in 15th.

Both Melbourne and the Gold Coast are our biggest winner and loser of the week, and also lead the season nominations with 4 apiece.

Melbourne also picked up their 5th +60 blow-out loss for the season. Unfortunate for such a proud foundation club to become the whipping boys of the AFL.

Other changes... the Magpies and the Eagles change in 4th/5th yet again, and the Saints drop out of the top 8, with Adelaide moving up.

Again worth noting, as per last week, that even though the Saints won against the tip, their reward was not as great as for Adelaide completely dismantling the Giants, or Richmond's bigger than expected win over the Power. Those wins provided bigger dividends and allowed them to jump over St Kilda.


Looking ahead, it is all smooth sailing for the Hawks. Three games coming up against GWS, Gold Coast and Melbourne. Expect blow-outs aplenty.

We also see Melbourne playing the next three games against Richmond, Fremantle (there) and Hawthorn. Dees supporters must be having one of these years. (You might need to play this via YouTube).