Looks like we tripped up a touch in suggesting Round 8 was the best chance to score 9 correct tips... and the Whopper Burgers that footytips.com.au would lay on, if you tip with that webpage.


The Lions, in a classic jumper from their past, turned on the heat against the Bombers and won, against most tipsters expectations.
They ran out with the same type of play that won them a famous treble of premierships in the early part of this century, that put that Lions team into the elite in the VFL/AFL history (read the linked article from Rohan Connolly on his assessments of the best of the best).

If the social media feedback from the Saturday afternoon game is anything to go by, the old Lions jumper will be back in 2014... much loved by most of the football world.

And if that win didn't trip-up your tipping, the Collingwood's win over Geelong by a goal, and the 'historic'* draw* between Sydney and Fremantle would have too.

* If a draw can be 'historic'... though it was the first ever draw for Fremantle.
* We don't count draws as a winning tip. Footytips.com.au does, Monash Uni doesn't.

The draw cost Sydney not only a certain 4 points in the AFL table, but also a loss of 12 rankings points under our system. 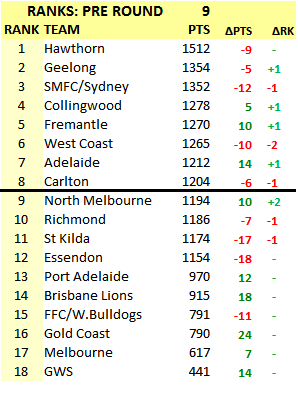 This allowed Geelong, who also lost, to leapfrog them into 2nd position on our table. This again is another of those anomalies where you can lose and climb the rankings*. The Sydney penalty for not winning by about 23 points was far greater than the penalty applied to Geelong, who were expected to win a close game.

A raft of other changes this week too, the most in fact this year.
Collingwood and Fremantle both rise up over West Coast after Saturday nights performances. We expected West Coast to win by a lot more than a kick after the siren.
It is also worth noting that our rankings are not influenced by umpiring, so that whole Shuey/Selwood debate is not welcome here.
And if anybody comments on the Selwood family propensity to drop the knees to earn a free kick, have a look at that Krakouer goal in the last quarter... clearly collapsed in the tackle.

Happens. Every. Game.
Get over it.

Also down on the table, and down on rankings after not meeting expectations are Richmond and Carlton, while North Melbourne jump 2 spots after that near win / noble defeat... if such a thing exists.


* For more information on rankings, read "Comparison of AFL Power Rankings Systems" by Troy Wheatley, who delves a deeper on rankings theory. Our blog last week was Rankings 101. This is Advanced Rankings.