It was a good week to be from the Golden West, as both WA based teams romped it in and scored huge wins against the bottom two teams.
That is, of course, if you like seeing the wounded and frail kicked to a slow and horrible death.

...Wait a minute!!
Were talking about West Australians.
Those folk who once declared war on Emus.
YES, REALLY!
So, they would have had a great weekend after all.

As to the rest of the footballing world, well there was a little unsavoury incident that kicked off Indigenous Round, and soured the whole weekend.

And then the tipping wasn't so easy either, as predicted by Andrew O'Keefe.

Only those teams playing at home against hapless opposition could muster the win at home this week, as the away teams won every other fixture

Another week of being knocked about tipping wise, as we picked up just 6 correct.
A good week to forget your tips in those tipping competitions where not tipping gives you away teams... An instant 7 correct! Huzzah! 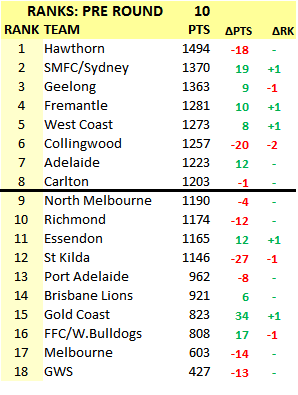 Sydney's big Friday night win brought them 19 rankings points and step back to 2nd on our table, jumping over Geelong who also won and also collected points.

Thar Swans win dropped Collingwood down to 6th, the lowest they have been all season. Fremantle and West Coast gain points slightly, and together leap over the Magpies into 4th and 5th.

Lower down the table, St Kilda were expected to defeat the Bulldogs missed that chance and drop a huge amount and on place on the table.
And though the Bulldogs won and collected 17 points, the Gold Coast's effort against Hawthorn (a 4 goal loss against the expected 13 goal loss) boosted them up above the Dogs into 15th.
A new record for an expansion club, and they could find themselves higher before the season is out.


Surely its not possible that we can have too many weeks where the results winners are read as "away, away......"

By the way... is there anyone else (other than us) who thinks Mick Thomas looked a bit Eddie Maguire way back when?