While the Melbourne football media are all over the Melbourne FC situation, the challenges for the MFC board, and the whole 'Wheel of Coaches' that is the main options to replace the currently un-sacked Mark Neeld (and a big "hello to 774 3LO / ABC Melbourne), there are other clubs on the slide.

Of course, they have an ageing list, a new coach, and 'list issues' as well (i.e. stock of players per ground position). These are nowhere near as big as the issues facing the Dees, but could we be seeing the end of the Saints era, and the beginning of the club sliding into a re-build crisis?


THE RESULTS:
This weekends tipping had a pattern to it.
Finally.
... Kinda. 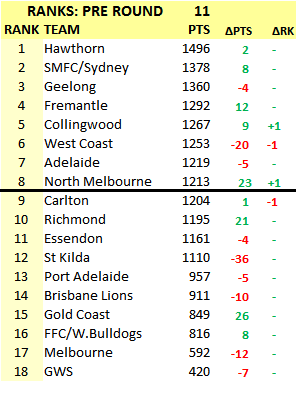 The close games went close... but against the tip...

And the regulation wins also went to plan...

And then came North Melbourne's big win, and Richmond blowing the predicted Eagles margin to the scheißhaus, and go completely against type.


Only a few minor table changes as per above. What is notable is the activity at the foot of the table, where the Suns are closing in on their near meighbours the Lions. We may be a week or three away from seeing the Lions ranked as the second best team in Queensland.


PS: Monday Night Footy is complete scheißhaus... it delays a proper weekend review, stuffs up the regular football followers patterns and screws with regular football TV schedules. We hate it!
Posted by The FMI at 10:26