The weekend that was... an extraordinary mini-round of football.
Did any team not have a fade out this weekend?

TWO blow-out games:
...That highlights how good one premiership contender is, and how poor another team is going:

Just a dominating display by Sydney, on Adelaide's own dung heap too. It makes last years 3rd place seem like an anomaly now.
Collingwood did what was expected. Enough. No more analysis needed.

TWO games that were close ones that shouldn't have been:
... if only the leading teams held those leads,

Both Carlton and St Kilda doing, as Ben Cuzzupe tweeted, an attempt at chucking games away like the best of them.

Carlton, GWS and St. Kilda tried their best to emulate North this weekend, and the original won out in spectacular fashion. #bfgnhighlight
— Ben Cuzzupe (@BenCuzzupe) June 9, 2013

Really, both Carlton and St Kilda should have won, and it speaks volumes on where those clubs are at... as well as where the opposition on the day is too.

ONE game that should have been a blow-out:
...but thanks to some largess by a premiership contender it just snuck under the limit,

Did Geelong really play badly, then kick into gear? Or did the GWS do really well, but just couldnt match it with the big boys?
Well, maybe a little from column A and a little from column B.
Hopefully we get an 'open letter' from Sheeds sometime soon that will tell us the whole picture.

ONE game where one team should really have won:
...but couldn't control the game and allowed the other to play as they want and storm home for the win.

C'mon North, really!
There was plenty enough talk in the media about your mental toughness and resilience in holding onto games. After the Saints win, people expected that North might have turned the corner.
But no.
North go and set a new benchmark in sustained fade-outs.


THE RESULTS:
Some minor changes and some mighty ones too.

The observant of you will note that Collingwood and Melbourne move at different rates compared to West Coast and St Kilda. 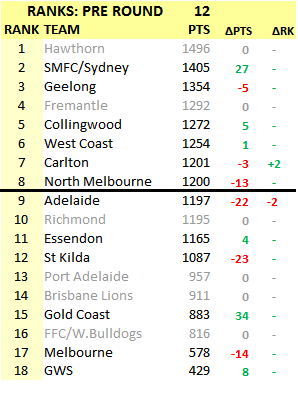 We tipped Collingwood to win by 68 points and win by 83 points and rise only 5 pts and Melbourne drop by 14 pts. The Saints though lost by 1 point more than the expected margin and lost 23pts.

Why is this so, I hear a small voice in the back of the head of our loyal reader?
Well, here is part of the answer:

Going into this weeks match the Saints had a massive carry-over penalty (third biggest of any team this season) that meant that they needed to win, or do better than the expected margin (or meet it) to avoid the -23pt penalty. Anything worse than the expected would incur that penalty, and more if the loss was dramatic.

Melbourne, in contrast, had less than half the carry over penalty that the Saints had (and therefore a less dramatic fall this weekend).

Over to the table and just the one change high-lighted, and it makes the positions 7 to 10 (4 teams) separated by only 6 points.
This is also the second time this year that any team is within 100pts of Hawthorn (last was Round 2: Hawthorn 1492, Sydney 1398).
It is also the second week that Melbourne are under 600pts.


Target Performance:
In other news, on our chief measure of success this season, we are clinging to the top 20 of the Monash University Tipping Competition, and averaging 9.1 points per game tipped.
This is under our target set at seasons start of 9.64 points per game.

And while it is listed as out No. 2 goal in that post, the re-jigging of the tipping algorithms was geared to this competition above normal tipping winners competitions such as footytips.com.au etc. Therefore it is our primary objective.

Soon, we will look at comparing this seasons algorithms against last seasons to see if we have improved or regressed.


For North and Brad Scott