12- A Week Off Is A Long Time In Football

The cliche normally runs as " A week is a long time in football", but this week... the week of the second six-game-bye series, has proven differently for Melbourne.
A tough year all round will continue as the Jackson restructure actions are set to keep on rolling on. With the confirmed support of the AFL, the wheels are now in motion. The first public actions were on Friday when McLardy and another board member stood down. At that board meeting, the Neeld decision was also made.

Neeld's departure has been well covered in the rest of the football media, and on the social media as well. We wont add more to what is out there already, other than to say read Adam 1.0's take on the Neeld issue, and the MFC to the half year:


2013 mid-season review and State of the Union

Mark Neeld, like Neil Balme, Neale Daniher, Dean Bailey and god knows who else you are now free. Thanks for at least having a crack (albeit on a higher salary than the Prime Minister by the sound of it), but it's all over. Like them you may now go on to a less high-profile and lower paying but significantly less stressful job that won't make you look silly on a weekly basis.

Click the headline and read more. Its long, sometimes traumatic (from a football and Melbourne FC point of view), but mostly good natured and often laugh-out-loud funny. The best fan-blog on the web, for our vote.

... and how this guy hasn't been given a paid writing job WE WILL NEVER KNOW.


THE RESULTS:
Six in the bag this weekend, in what turned out to be a pretty easy week to tip.

The real surprises out of the tipping was Hawthorn actually letting Carlton lead for a significant period, Richmond hold off Adelaide, and Collingwood seemingly coasting in the second half. 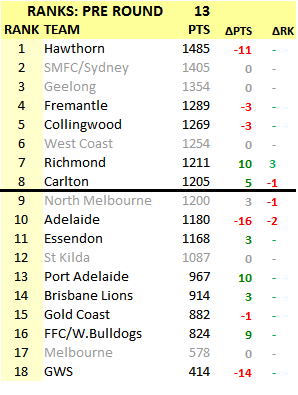 Otherwise a fairly disappointing weekend's football that would not make the AFL boffins at HQ very pleased, we would think.

The only significant changes this week would be the 3 place improvement of Richmond into 7th, and the displacement of Adelaide down to 10th.

Hawthorn also it seems, are slowly heading back to the pack. This weeks drop off brings them a total rankings points loss is 42 points for the season. Not drastic or dramatic, but interesting.

Final comment on Adelaide... there seems to be people realizing around this time that Adelaide might miss the finals and thinking "but they were top 3 last year".

This is where a 'longer view' rankings system shows that Adelaide had an exceptional 2012, and were never really much better than mid table.

Example: We had Adelaide at 8th at the start of the year, and 10th now.
Compare that to

Those ranks are of course more dynamic during the season and correct quicker. But in cases where teams are 'over-performing' then there is an element of over correction that, in Adelaide's case seems to be misfounded.
Posted by The FMI at 10:01