Does 6 games  x 3 weeks of football turn people away? So say some in the football media and twitter-sphere (and to be honest, we are not really sure what this Almanac post is on about).

This topic of the two rounds split into three weeks was broached over the weekend by Jon Pierik at The Age, as the three week bye round period was winding up.

There is a feeling among some that the season has lost momentum, with six teams having one round off through rounds 11 to 13.
...
AFL chief executive Andrew Demetriou said on Friday the current bye system could reduce the ''excitement'' of the season but felt it had worked well.
''While it takes [away] a little bit of the excitement because you are playing six games, it's appropriate. We need to make sure we are conscious of everybody getting the right break for work-life balance so that the back half of the season they are performing at the right level.''

Given the last comment from Andrew Demetriou on 'work-life balance', the league and players see health and welfare of players and staff as important. We applaud that stance.

Have the 18 games over three weeks all been snore-fests rivaling a weekend long ABC-TV marathon of "Birds Of A Feather"?

Rohan Connolly of The Age, suggests that might not be the case...


Goodbye to all that

"...when it comes to maintaining interest in the AFL competition overall, the past couple of weeks have hardly been duds.Indeed, AFL general manager of broadcasting, scheduling and legal affairs, Simon Lethlean, points out that last Saturday night's Essendon-Gold Coast clash at Etihad Stadium was the first Saturday night game this season to attract more than a million TV viewers.''We think the three rounds of six games is the best model for maintaining the momentum of the season, better than the other combinations we've tried,'' he says."

Ahh yes. Mr Lethlean brings us back to the raison d'être of the League. Supporting its broadcast partners to "attract more than a million TV viewers".


So what can be done to improve the bye rounds and dispel the chorus of punters saying 'boring'?
Well, have one week as a bye only... and let soccer and rugby dominate the sports landscape? Errrm... No.

How about this? Staring the AFL in the face is the best way to make the bye rounds more interesting.
Move the schedule so that two of the first four weeks of footy (you know, the big block-buster rounds) are run over the three bye weeks.
Easy.
Done.
Exciting footy for all.

Except that the first few weeks become dull.

And the point of the blockbusters at the start of the year are to hype up the mug-public about how the AFL is running such a Jim Dandy of a competition that folks just love it to bits.
But that 'sugar high' only leads to a later season crash and burn.
Like now.

So get used to it footy fans... some weeks just aren't that interesting, at least, to the 'opera goers' that love the spectacle and not the sport.

And it could get worse as the AFL looks for 2 byes into the future.

"On whether or not the League planned to introduce a second bye next year, McLachlan said the AFL was open to the idea.
"If we're going to have our best athletes out there playing, I think that we have to push for two byes," he said.
"We're re-jigging our stadium deals to try to be able to bring our season forward to facilitate that. We're working hard to get the MCG, which is a big piece of that … I'm more confident than not that we'll get that up.
"It's a challenge. There's been criticism of the bye this year going over three weeks but what we're able to do with that (is) in every market outside Victoria we can have one of those local teams playing every weekend. So if you go to two (byes), if you have a four-five (game) split over two weekends you can’t get that.
"Another alternative is just to have no football at all (but) I think that's problematic as well.""

Other than  those two upsets, the week went according to plan, though our margins were out by about 3 goals. 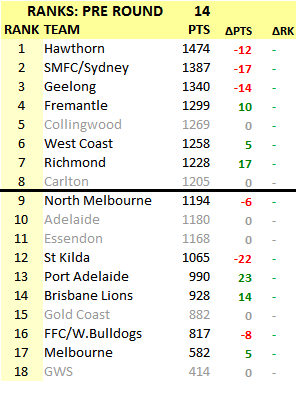 This was good enough to score us the 10 points for the correct tip, plus a few bonus points for margins near the mark in the Monash Tipping competition. Enough to keep us in the hunt, at least.

And with the Monash tippers, only 1 of the approximately 60 active tippers picked Port Adelaide to defeat Sydney, and none picked Brisbane.


As to the rankings, we have no positional change on the table at right, but we do note that
- Fremantle edge closer to 3rd spot, possibly 3 games away from claiming it from Geelong.
- Richmond entrench themselves further into the top eight ranked teams.
- St. Kilda continue a slide that could see them 13th in a few weeks.
Posted by The FMI at 10:58