At the start of the year, we noted that we had changed the algorithms and mechanisms we use.
We also published a blog post with expectations of where clubs might finish the season, based on expected number of wins, and also expected end of season ladder position. These are here at the post Rate Expectations.

The below post re-crunches those numbers, with the information we have learnt over the season, and the effects on the rankings.


PLEASE NOTE: Data calculated post- round 13. Match results from games in rounds 14 and beyond will affect the below.

PREDICTIVE POWER
After Round 13, we have used the results to date and the movements in rankings seen so far, and recalculated the predictions as per the tables below.

First, to explain the mechanics.


- We took the current results (known) and the fixture of the remaining games.
- Into the remaining matches, we factored in a score for each team, based on their current ranking.
- We including a factor to allow teams to play above and below their ranking.
- We also added a degree of randomness that allows for upsets.

After each teams theoretical match, their ranking points were adjusted to reflect performance (as per our normal rules) and then that adjusted rank was used in preparation for the next match.

Iterations of the above were run multiple times and produce the charts (and data) below
The two key charts we looked at are:

1. Final Ladder Position (Home and Away) 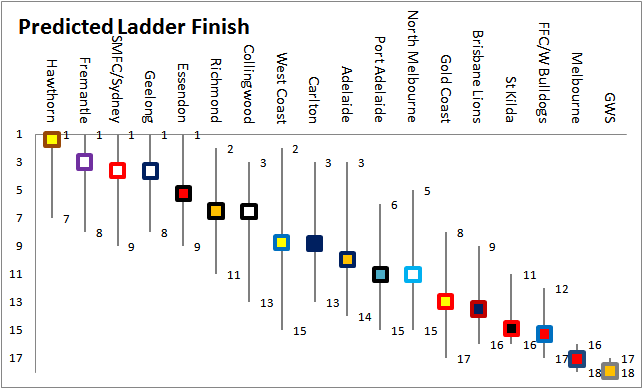 Looking immediately at the chart, the Hawks should finish top, and we have Fremantle in second. Geelong and Sydney are averaged out to be almost un-splitable in 3rd and 4th, with Sydney just nudging ahead.
A similar story exists at 6th and 7th where the Magpies and Tigers are both neck and neck, and also 8th and 9th where both Carlton and the Eagles are close. The last near-match is between North Melbourne and Port Adelaide, split by 0.01.

As an aside, for Sean Ross who run the Richmond Electoral Maths blog series, we see his team finishing 6th or 7th (depending on the Pies).

As per the chart above, the are clusters of teams calculated to finish in and around the same positions, as highlighted by the orange areas in the table below. 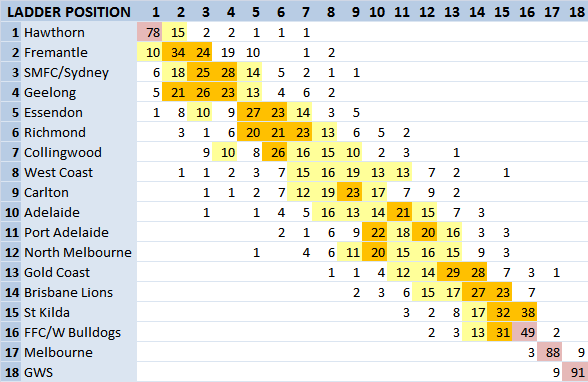 An interesting case is the West Coast Eagles, who have no strong individual finishing position, but an even spread of probabilities between 7th and 11th.
You can also see a wide spray for Adelaide and North Melbourne.
This makes definitive final ladder predictions difficult.


2. Total Season Wins (Home and Away)
The other measure is to look at the number of wins in a season. Again using the same calculations we totaled up the wins and averaged them to arrange a ladder formation, as below.

This produces a different run of teams than the above (using the same data and calculations!!). 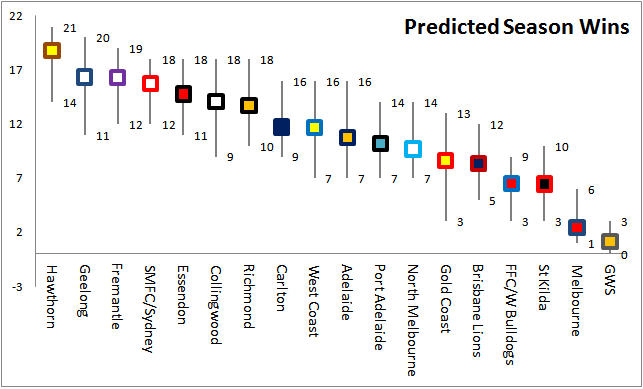 Compared to the previous chart, Geelong shuffle up to 2nd and push Fremantle and Sydney down, Collingwood and Richmond swap in 6 and 7, and the Bulldogs and Saints swap in 15th and 16th spots.

Again these charts are produced from the raw data as here. 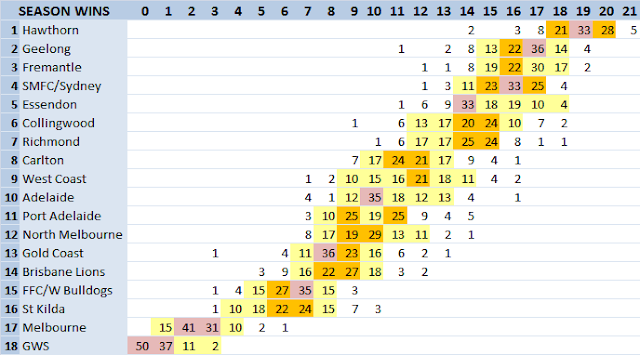 As per the previous table, the numbers above a percentage likelihood of obtaining those numbers of wins.
So, for example, Hawthorn are a 5% chance to go through the season undefeated (from here). Also the GWS are a 50% chance to end the season without a win.


If we compare the above two charts to the pre-season predictions (as per the below right), we can note:


- We have demoted the Eagles out of the top 8, 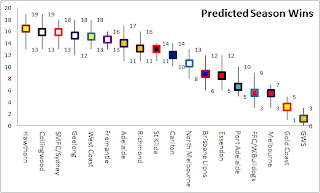 - Fremantle have improved substantially over the season and raised expectations to to top 3 finish from our expected 6th.

- Richmond fans, who might have had warm feelings with our pre-season prediction of an 8th placed finish should be happy to see us tipping them for 7th and possibly even 6th.

- Adelaide are also out of our finals predictions, slipping from out expected 7th down to 10th. 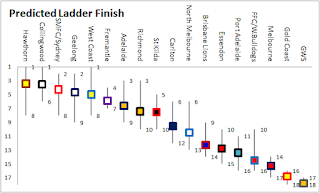 - On the other hand, Saints fans wont be pleased that a preseason 10th ranking has now turned into an expected 15th.

- And we need to eat humble pie with rich red tomato sauce, as the Bombers fly up,UP in our estimations. While they may remain 11th ranked, we expect a revised finish of 5th or more. A long way away from the March tip of 13th!