At the beginning of the season we posted that we had reviewed our calculations, to attune them better to take on all comers over at the Monash University Tipping competition.

In tuning these algorithms, we benchmarked against our data against the Monash results over the seasons, and then set the goals and made predictions based on that benchmarked result.

It is fair to say we have been less than successful in meeting these goals to date, but have had some success.

This post will reference both the goals we set for ourselves, and the outcomes we expected come year end.

MONASH TIPPING
In benchmarking the new stats, we worked up a 2012 full season (including finals) points score of  1992 points which would have won the competition.

We then set an even more ambitious target of scoring 9.64 points per game.
Tracking our Monash tip performance week in week out, and charting it  (below) we can see we are under this mark. It doesn't look like we are under by much, but given the numbers are averages, it will take exceptional tipping to achieve the target from here. 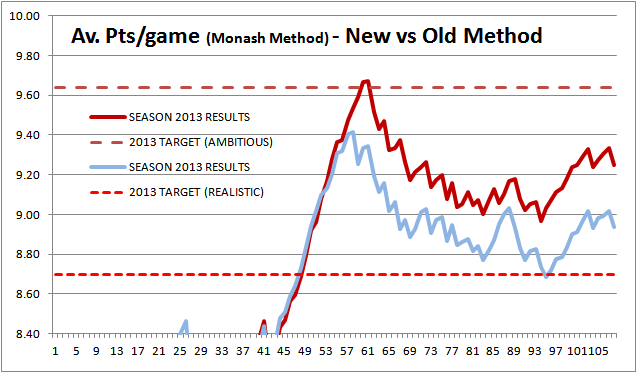 We also noted in the pre-season blog post that a more realistic target should be 8.70 points per game, as the variation in results at the Monash site varies a lot.
As per the above chart, we are trending well above that to date.
Interesting also to see we have breached the 2013 ambitious target back in round 7, but since drifted away.
More importantly, our amendments to the tipping mathematic has shown an improvement over the older system. The 2013 data has us about 35 points higher than last season.
This, as will be confirmed later, is an improvement in accuracy of margin tips over the season.


STANDARD TIPPING
Looking at just the "are we tipping teams correctly" category, we originally set an ambitious target of 80% correct through the year. Currently we are missing this target by quite a way, sitting at 71.3%. The chart below shows part of the seasons tipping run. 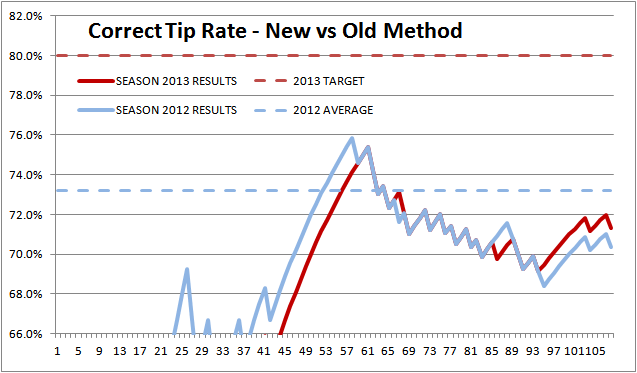 As the above chart shows, for a fair part of the season, our correct tipping rate has been lagging the 2012 method, only surpassing it in the bye rounds.

The above comment that our accuracy on margins has improved is seen clearly now, Currently head to head, the 2013 method is 1 correct tip ahead of the 2012 system. This would give us a 10 point bonus on the Monash  scoring system, and sice we are 35 points ahead there, we have picked up 25 points in improved margin tipping.


All of the above shows that we have improved to a point, but not enough to meet our targets.
Further, we are happy to have improved over the past seasons system, but tipping only 71% correct is not acceptable, and the data and mathematic systems will need another review at seasons end.
Posted by The FMI at 22:54