Melbourne have been in the media spotlight for a good portion of the year. And rightfully so after massive losses and various levels of disarray, and as mentioned this post, their ratings by our system has fallen more that 20%, and they are playing like an expansion club.

There are others in the regular football press, and the non-mainstream media. that also have applied the blow-torch to the Western Bulldogs this year, comparing them to Melbourne.

Has this recent scrutiny been entirely fair on the Western Bulldogs?
Are they really not doing so well on the ground?
Is there anyone else who looks to be struggling in 2013?


The Bulldogs, Dogged:
The Roar described the Bulldogs as having "one of the saddest playing lists in the league". The article also mentions that since Round 12, 2012 until Round 9, 2013, the Bulldogs only won 1 match. The article compares this to Melbourne (3 wins) and the Gold Coast (7 wins).

The Age ran two articles on how the Western Bulldogs were on field in a terrible state (links later). 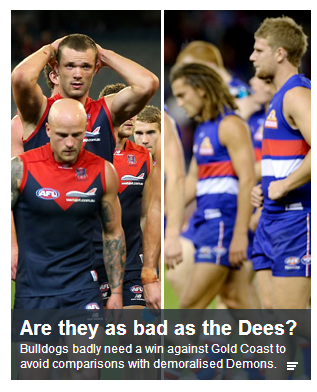 ...which is why you then go ahead and make exactly that comparison!

Michael Gleeson at The Age wrote that the Bulldogs are more deserving of criticism this year, but are slipping under the radar of the media spotlight due to the collapsing Demons season.


Perceptions punish Demons, but Dogs are none too rosy

"The Bulldogs have escaped serious criticism because, first, there is always a more compellingly pathetic option to focus on (Melbourne) and because the players have appeared largely to be trying. They have been competitive in each of their games - bar the West Coast loss - even when the margin has blown out late in matches, such as occurred again at the weekend against North. They have also played better sides than Melbourne has and pushed them harder (Geelong recently).

Further in that article, they also produced the table below, which basically repeats the tale discussed by "the Roar' of the past 18 games for Melbourne and the Bulldogs

The Bulldogs won four of their first eight matches after McCartney took the helm at the start of 2012. Since then, however, their only victories have been at home to Port Adelaide in the middle of last season and at home to Brisbane in the first round of this season.

Their record since that victory over the Power is worse to that of beleaguered Melbourne. Not only have the Demons won four matches but they rank ahead of the Bulldogs for average scores for (78.1 to 69.4 and against 113.6 to 118.2) and also inside-50 differential deficits (-7.5 to -11.3).

The positive spin of the article provided by McCartney:


One area the Bulldogs must improve in, McCartney said, was ensuring areas in which they perform well in, such as clearances and contested possessions, result in scoring more regularly.
"We know exactly where we're at, and not a day goes by where we don't work our backsides off in those areas to get better in those areas," he said.
"The time will come quite soon where we'll start to get more reward for the hard work we're doing around the ball. That's the challenge for our players."


Rankings Analysis:
The above analysis maybe true. It is possible the Bulldogs have been missing deserved criticism due to the failing at the oldest club. But if we look at our rankings data, we see different results. (Run through of rankings system here)
Firstly, just looking at this seasons data only, we see the two teams with the biggest drops in performance this year are (after round 10) Melbourne, who have lost 175 points (22.8%) and St Kilda who have lost 171 points (13.3%). We touched on the Saints fall in this recent post.
The Western Bulldogs on the other hand started the year at 790pts and now sit at 816pts... a modest 26pt gain (up 3.3%).

Reaching further back than this season, back to before round 12, 2012, we can chart the three teams' ranking points movements and create the below: 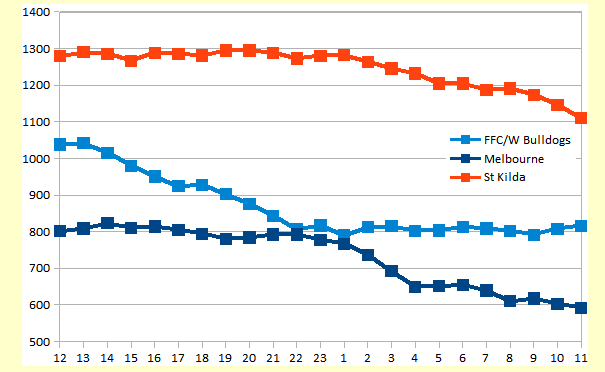 In this chart, we can indeed see the decline of the Western Bulldogs during 2012, but also that they have arrested that decline this season.
Melbourne though had a reasonably stable end to 2012, but the beginning of 2013 saw a large, rapid drop in rank in rounds 1 through 4, and a continued moderate slide in performance since then.
Worth also noting the beginning of a downward trend for St Kilda, basically for the seasons start.

Have the Western Bulldogs missed the harsh media scrutiny detailed earlier?
Well, we think yes, but qualify that by saying the attention to the Dogs decline is about 10 matches too late, and they should have been brought under the microscope in the last rounds of 2012.

Has another team been flying under the poor performance radar while the Demons have copped the attention?
That is another qualified yes. It has been St Kilda who we think are dropping alarmingly this season while having little written, said, or sung about them.
Under our rankings system, the Saints this season have had 4 of the biggest weekly rankings points drops of the year (equal with Melbourne). On the positive side, they have only had one blow-out result (+60pts)


Historical Context:
As before, the Saints have lost 171 ranking points, and also dropped in our ranking tables from being the 5th best team at the seasons start, to now being the 12th.
This 12th position ranking puts them back to where they were in season 2004.

From the above table, we see the Saints current AFL ladder position as 16th, but our rankings have them 12th, but they have dropped 6 rankings positions and are likely to drop further. They only maintain a reasonable ranking point figure now (compared to 2004) as the addition of the two expansion teams (that have had a poor start) has added more points to the pool.


From this, it might also be possible to draw the conclusion that the 'Premiership Window' is all but shut for St Kilda.
We will leave further discussion around the options for 'where to from here' to the Saints members and supporters, some of whom have already noted the loss of players drafted, the surfeit of some types of players and dearth of others, and other list analyses.