"Thursday Night Football" on Channel 7 became "Thursday Night Ettiquette School" as the commentators sought to 'educate' the football fans into what is acceptable behaviour toward a player who had admitted to being an (unknowing) cheat.

Hectoring supporters on the TV, as the commentators did, wins them no kudos here. Those fans went to the game, paid their money and expressed their opinion in the time honoured fashion. We are talking about football and footballers, not a night at the opera.

The 'theatre' of football is and has always been totally interactive, and not a one way performance. Fans, particularly those that pay to attend, have every right to express themselves in a non-violent, non-threatening, and non-discriminatory way.

(And also lets not forget that on Saturday, booing at other players was deemed appropriate).

Comments were made about the effect on the player post-match. If his mental state was of such concern, the club should have considered that prior to listing him to play.


But then again, this is the same club that "allegedly" thought so little of their players health and welfare that they ran then a "pharmacologically experimental environment never adequately controlled or challenged or documented".


Partick Smith at The Australian skewers the issue (and Essendon) nicely in this piece, published today.


If the drug scandal won't go away then the AFL will

"On the weekend, Fairfax media reported that ASADA was looking at the possibility that Essendon players were unknowingly involved in clinical trials to determine the efficacy of AOD 9604, a drug banned for human consumption. The claim has been made that a group of Bomber players were injected with the drug regularly and over time. The results were then sent outside the club to be evaluated against the results of players not on the AOD 9604 program.

If true, the supplement program run by Essendon must be seen in an even more disturbing and cynical light. The health of players was deliberately put at risk for clinical trials which are principally a commercial tool to establish both the physical benefit and business commerciality of the drug. Essendon did not run a club but a laboratory."


Just what were Professor Weirdo and Count Kook doing in their secret laboratory up on Horror Hill?
"Better hold my hand, I'm feeling sick!"


THE RESULTS
Only 6 of the nine games correct this week, but a few games tipped very close to the actual margin. Some consolation in that.

We missed the wins to the Dons, Port and the Dees, but went very close on the margins with the Adelaide game (out by 10 points), the Sydney and Hawthorn games (out by 9 each), the North Melbourne game (out by 4 points). 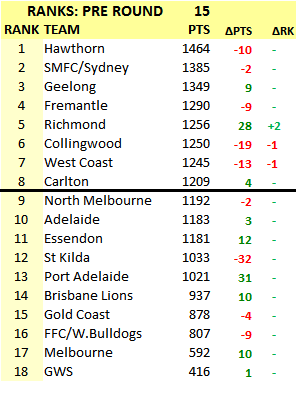 As mentioned by the spiffy new Power Rankings blog, the big movers of the week are Richmond. They are fifth here, having moved up 2 spots over West Coast and Collingwood (the Tigers are 4th at the Power Rankings).

Hawthorn continue to drift back to the pack, now 67points under their peak ranking, and under 100 points away from any nearest rival.

Essendon hold 11th, but are now just 2 points off Adelaide in 10th and another 9 points off North Melbourne in 8th.

Meanwhile in 12th, the Saints continue their slide. Again, the Power Rankings list them as the worst performed team of the season. Our data also has them as having dropped the most rankings points as well, down 249 points (just under 20%).

Joining the Saints as teams with big losses are:
Melbourne  -175 points, and West Coast  -80 points.