As cliches go, "taking it one week at a time" is the AFL's most overused.
But there is some merit to it.

The Richmond Cheer Squad, full of the excitement of a September beckoning, produced a run-through that alluded to the team possibly playing finals this season.

Only to be let down by the team on the day, in a big way.
A 62point drubbing kind of way, which was the first spectacular loss for them this year.
Their closest other big loss was to Geelong in Round 6 (by 44 points).

Stack that record up against previous years, and live is not too bad at Punt Road.


And with the Tigers getting the walloping from the 'Roos...


The only other footballing brain fade of the weekend comparable was seeing Carlton fall away after a lightning start. Which has probably burst their finals bubble.


THE RESULTS
Not many close tips this weekend, and quite a few more missed all together. A poor effort.

Three of our four games tipped to be close (2 goals or under) ended up wrong... might be work to be done on the calculations for the off season.

Lots of movement in the table this week with 7 position changes all totalled (4th most number of changes all season). 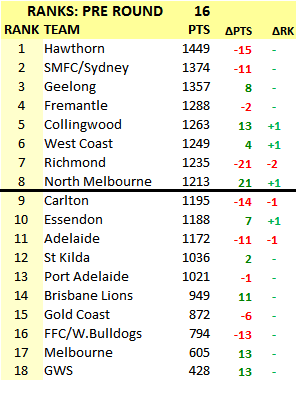 Falling down to 7th from their seaosn high of 5th is Richmond, after that big loss to North Melbourne. That win by North sees them rise to 8th and break the 1200pts barrier to boot.

Richmond's fall also means Collingwood and West Coast return to 5th and 6th positions again, while North's rise drops Carlton out of the 8.

Essendon also rise to 10th on the back of doing 'just enough' to defeat Port Adelaide. They displace the other SA team, who lost to West Coast by the same margin we tipped then to win by.

Also of note... Hawthorn continue to return to the field, as their ranking now drops below 1450 for the first time this year. Clearly still the best, but there is a noticeable drift of them toward the chasing pack.

And the two bottom teams pulled in 13 points this week, and this meant Melbourne return to the +600 marks again. For the GWS, it drags them away from the sub 400  point bracket, but they are still in a dire place.
Posted by The FMI at 12:25