Tip results further down, but first...!

AFL, You're Doing It Wrong
How to apply a rule to make the game faster, them modify it to make it more complicated, then decry the speed of the game, and then work on other ways to slow down play.


Question: When is the "players call on advantage" really the players call, or the umpires call?
Answer: When the umpires sense a boil over is on the cards.


Essendon, You're Doing It Wrong

All the talk from Horror Windy Hill has been about "rogue elements" and "actions external to the club", in relation to the (alleged) drugs injected into the players during 2012.
The constant stream of denial and obfuscation is even affecting the commentary from AFL HQ, where Andrew Demetriou seemingly ignores WADA advice that AOD-9604 as banned under section S0, and instead suggests:

" "There is an issue around whether it is banned or not banned. There is a classification issue around that, but again I am not going to speculate …" "
(AGE: Demetriou has doubts over drug)

Firstly, the obfuscation is wrong. WADA is the determinant on drug acceptability or not. It is not the realm of the ACC. Secondly he wheels out the tried and true Bombers approach of speculating but tagging the specualtion with the old "I'm not going to speculate" caveat.

What the Hill denizens should be saying is actually being said by Asafa Powell, who as of this morning has been found to have a banned substance in his system.

“I accept the consequences that come with this finding – after all there is only one Asafa Powell. My fault however is not cheating but instead not being more vigilant."

Asafa Powell - doing media right, and acknowledging his error. (Full text available at the link above).


Ben Cuzzupe, You're Doing It Wrong.


This has been the worst round of football I could think of for a very long time. #yawn
— Ben Cuzzupe (@BenCuzzupe) July 14, 2013

Some weekends appear yawn inspiring. But when you look closer;
- North's fade away against Brisbane wasn't entertaining?
- The Dogs getting within 6 points of Essendon (almost, as per the above)... nothing?
- The "Saturday night, trousers tight" (though admittedly crappy scrap) between the Gold Coast and Richmond?

Hmmm... maybe it was a dull weekend. But it is all part of Life's Rich Pagent. Let it pass by. Enjoy the bits you like.


Now... Normal service resumes as we go back to the tips and rankings.


THE RESULTS
Another non-burger weekend, and this time its the result of yet another North Melbourne melt-down.

Our tipping picked up 8 from 9, but more importantly we were close on the margins on only 2 games (Collingwood tip out by 5 points and the Essendon tip by 9 points). The accuracy was lacking this week, being about 20 points out on almost all other games. 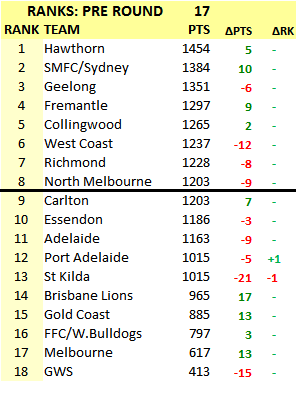 The rankings table does not change to any great extent, other than the further lowering of St Kilda, who this week drop to 13th.
Their season began at 6th on 1282 points, so that is an overall decline of 7 rankings positions and a drop of 267points (down 20.6%).

Of interest also in the rankings table is that possibly for the first time ever, we have two pairs of teams on the same ranking points.
North Melbourne and Carlton both sit on 1203 points, but North claim 8th spot as they are 1203.2 points, while Carlton are 0.6 points behind on 1202.6 points.

And even more co-incidental is that in the next round it is North Melbourne v Carlton and St Kilda v Port Adelaide.
Posted by The FMI at 11:51