If the latest Richard Baker / Nick McKenzie story is to be believed, then it certainly makes more sense that Essendon officials have used terms like "rogue elements, and "external to people to our club".


"At least five doctors external to the club who had an interest in the supply or sale of peptides are believed to have been associated with Essendon's supplements program. These doctors specialise in anti-ageing, cosmetic and sports medicine."

We have already had a guest poster, Dr. Stephen Downes, highlight one of those linked to Essendon, the 'anti-ageing' medic, Dr.Willcourt.

The Baker / McKenzie article suggests the Essendon club doctors Dr. Reid and Dr. De Morton are not associated with the peptides.
A small win for Essendon, and conformation of external people affecting the club.


What is more concerning is the notion that club officials were deliberately sourcing peptides and trying to obfuscate the sources.


"A small number of Essendon officials last year believed that having drugs prescribed by a doctor and then supplied by a compounding pharmacist meant the World Anti-Doping Agency's ban on substances not approved for human use no longer applied.

Basic internet checks reveal this belief to be unfounded, with the US Anti-Doping Agency's webpage warning athletes not to source drugs from compounding pharmacists, even when they have a therapeutic-use exemption to use a banned product."

If proven, this is a serious breach of WADA code. It also suggests that club officials were the drivers of the program, and that the doctor 'outsiders' were facilitated entry to the club and access to players by club 'insiders'.
It also suggests that these 'insiders' were 'doctor shopping'... multi-sourcing peptides via various doctors, and in effect running a systematic effort to administer 'supplements' to players.
This therefore makes redundant what the Switkowski Report found, that ...


"no one can yet be sure what happened at the club last year and we are still not fully aware of what took place."

This ASADA investigation report will make for interesting reading.


THE RESULTS
Proving once again that you can t trust football teams to perform as you expect, a poor return again this week with only 5 correct.

Add to that, some of the bigger margins tipped came in well under (looking at you Essendon, Hawthorn), and our tipping score, and more importantly the margin tips were well out. A net result of 68 Monash Uni tipping competition points was our lowest score since a 66 in round 9. 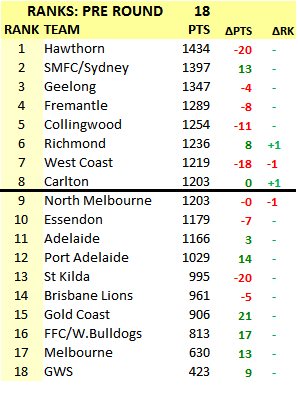 Looking to the changes, and the most obvious are:
-  Richmond rising up one spot, with the Eagles dropping down
-  Carlton and North Melbourne changing again. Last week they were separated by 0.6 points, and this week it is only a 0.2 point margin.

Looking further at the trends, we see the steady return of Hawthorn to the pack, as another 20 points are shed.
Their lead over Sydney has closed further, and the gap to second place is now only 37 points.
It was 158 points after round 8.

The Saints also continue to decline, now passing through the par barrier and into the sub 1000 point region.
This is the first time we rate St Kilda in the sub-1000 bracket since May 2004.
A near decade of Saint success at an end.